Calgarians gathered in front of city hall Sunday to rally in support of a woman’s right to abortion as a leaked U.S. Supreme Court draft decision brings the issue to the forefront of conversation on both sides of the border.

The potential reversal of the 1973 Roe v. Wade case, which established the right to abortion nationwide in the U.S., has sparked massive ‘Bans Off Our Bodies’ protests.

Betsy Jameson, a 75-year-old former University of Calgary history professor, grew up in Galveston, Texas, where abortion was illegal for a third of her life.

She says the right to choose is fundamental for all women.

“It’s been a very long struggle so I'm very heartened to see all these young people here who carry on this struggle if we have to when I'm gone.”

The right to an abortion does not exist in Canada in the same way it has been enshrined in Roe V. Wade, which has served as a legal example for reproductive rights advocates around the world since 1973.

Abortion is decriminalized in Canada because of a 1988 Supreme Court decision, but no bill has ever been passed to enshrine access into law. The right to an abortion is also not considered a constitutionally protected right under Canada’s Charter of Rights and Freedoms.

It’s why advocates attending the Calgary rally like Joann Reynolds believe the Canadian government should introduce a bill to protect the right to freely choose to have an abortion.

“We need to unequivocally say as a country that this is what we stand for. I mean, you think about all these people that were protesting in the streets for freedom so they could do what they wanted with masks and stuff so here we are asking for freedom of bodily autonomy,” she said. 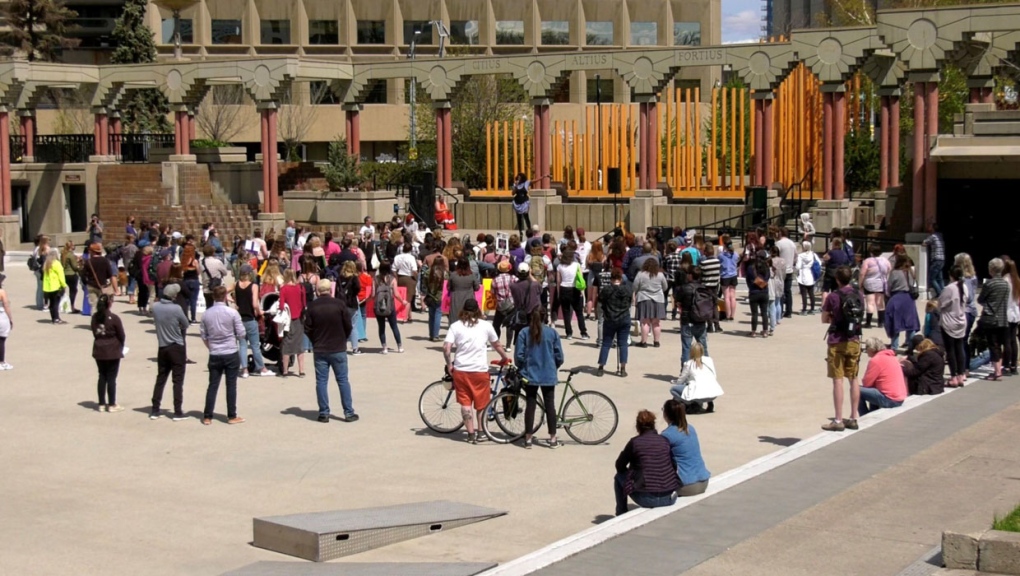 The event is especially important for organizer Adora ‘Statuesse’ Nwofor, a local comedian and abortion rights activist who has suffered multiple miscarriages and had an abortion as well.

She’s now calling for better access to abortion services, fearing that the Roe v. Wade decision could trigger a decrease in access for Canadians.

“Abortion is a health care issue so if we don't have access to abortion, we don't have full access to health care, which means that people will be dying, children will be impacted, and our society is not going to grow in the way that it needs to,” she said.

“There are too many of us who have had horrific experiences being pregnant, having children and navigating health care.”

Limits on how late an abortion could be performed during a pregnancy are determined at a provincial or territory level in Canada and enforced by the medical community, not by the courts.

Young girls like 14-year-old Violet Goulden attended the event to raise awareness for her peers that may be faced with the difficult choice of abortion.

“You hear about all the terrible cases that could happen and still happen very often, and there's just no access, so this could save somebody's life,” Goulden said.

The Trudeau government is spending $3.5 million on two projects to improve abortion access in Canada following the re-emergence of the Roe v. Wade case.

Funding will stem from a year-old budget pledge to spend $45 million over three years to help organizations make sexual and reproductive information and services more available.

Advocates said last week that none of the money had been paid out yet.

Three months since their arrival through a special evacuation program, Ukrainian families with children receiving care in hospital share their experience.

Amid buzz around the medical benefits of magic mushrooms, a new production facility gets to work in B.C.

In southern B.C, there's a new 20,000-square-foot production facility where one particular product is generating a lot of buzz: magic mushrooms, which a handful of businesses have been federally approved to produce.