Calgarians are doing everything they can to cool off as an Environment Canada heat warning covers most of southern Alberta with temperatures climbing to the high 20s to low 30s for the next few days.

Shane Paton, acting public education officer with Calgary EMS, says the younger population and the very elderly are the most vulnerable to heat exhaustion and should avoid long periods of time outdoors if possible.

“The first steps you want to take to prevent any heat-related illness is by staying hydrated or pre hydrating, don't wait till you're thirsty to start drinking water and limit alcohol consumption or caffeine consumption,” he said.

“You want to wear light colored, lightweight, loose-fitting clothes, apply sunscreen with an SPF 30 or higher, wear sunglasses, a large brimmed hat if you have one, stuff like that just to prepare before you enter the environment.”

Kali Berry was out Wednesday spending most of the day at St. Patrick’s Island splash park in the shade with her eight-month-old son, Luca.

She’s doing everything she can to cool off.

“We have squirt bottles with cold water for the baby, no one likes a heat stroked baby so we’re just keeping head cool and hanging out in the water,” Berry said.

“It’s good to be out here, we don’t have air conditioning in our house so for us it’s much needed.” 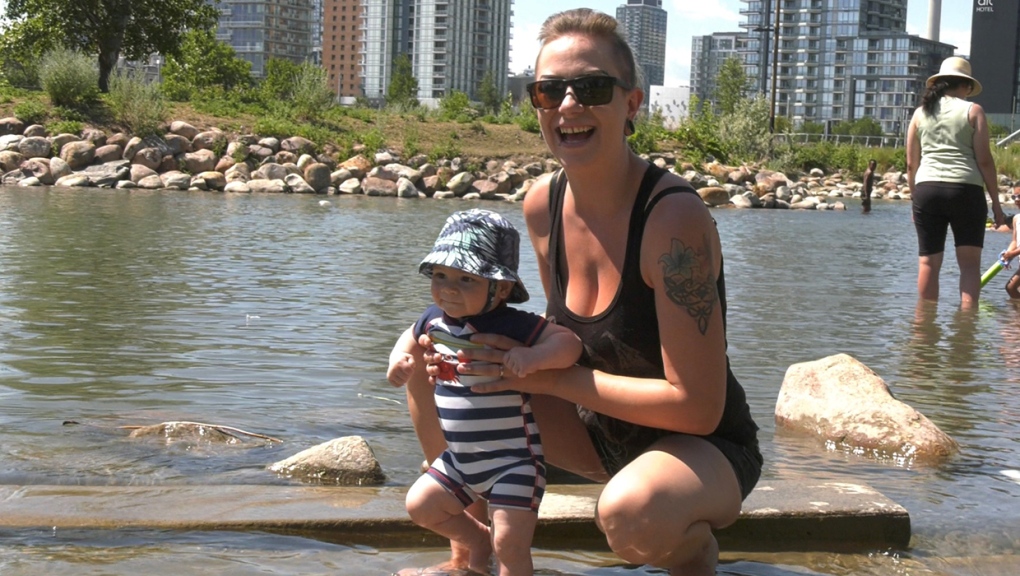 Kali Berry was out Wednesday spending most of the day at St. Patrick’s Island splash park in the shade with her eight-month-old son, Luca.

Meanwhile, the Tayler family is visiting all the way from Melbourne, Australia and enjoying a vacation in Calgary for the summer.

They’ve taken to the patios to get away from the sun and enjoy some reprieve.

“We can walk in shorts here, but back home long trousers, coats, overcoats, whatever you can put on, it’s super cold back there.”

Warm temperatures are creating very difficult living conditions for those less fortunate Calgarians who are without homes and spending most of the day outdoors.

The Mustard Seed said it is lucky enough to have a supplier who has graciously donated a large quantity of bottled water, but other donations are still needed.

“We need things like socks and clean underwear, new underwear along with hats and sunscreen,” said Clinton Siebert, street level supervisor with the Mustard Seed

“So just things like that really help people kind of get some reprieve from the heat.”

Siebert noted that Calgarians should keep an eye out for anyone that looks dehydrated or is struggling in the heat.

“Refer them to agencies like the Mustard Seed, check up on them, and acknowledge them because a kind word goes a long way.”

The City of Calgary is reminding residents to use water resources wisely as temperatures heat up and to be aware of over-usage.

Lawncare experts like Michael House with Nutri-lawn recommend watering lawns when it is the coolest in the early morning hours or later in the evening to avoid water evaporation.

“You want to water when the sun is not out, or at least not at its strongest so early in the morning is best,” House said.

“There's a lot of people with irrigation systems in town so watering overnight is a good idea. Just avoid watering anytime say between 10 a.m. and 3 p.m. in the day because you're going to lose most of that water to evaporation and it's not a good thing.”

House added that keeping your lawn at about two to three inches in length will also help conserve water because the more crown and roots that are available, the more water the plant is going to be able to access.