Animal rescue advocates and several volunteers have come together to provide emergency medical care for 125 cats of all ages that were rescued two weeks ago from a rural property just outside of Calgary.

The felines were surrendered to the Canadian Animal Task Force – a Calgary-based charitable group that works directly with shelters – to provide surgeries for the pets in need.

“Sadly, these types of situations we run into often where people reach out to us with dozens, sometimes hundreds of cats that they need help for, so we want people to reach out early on when they just have a few cats ideally,” Bailot said.

“For right now though, we have multiple cats requiring extensive medical care in a crisis-situation like this.”

CATF and its group of volunteers have been on pace Saturday to complete 60 successful spay and neuter surgeries, while about 20 cats are also requiring extensive dental care.

Baillot adds that his organization has been able to spay and neuter over 2,000 animals in just the last four months at temporary clinics, but the extra medical care has been a large financial strain.

“We're just really desperate for financial donations and a lot of people don't know about our charity, because we are a little bit unique in what we do,” he said.

“With all the various COVID-19 restrictions, it's made it a huge challenge for us to fundraise in person as well so it’s definitely been a unique couple years for us.”

Financial donations can be made online. 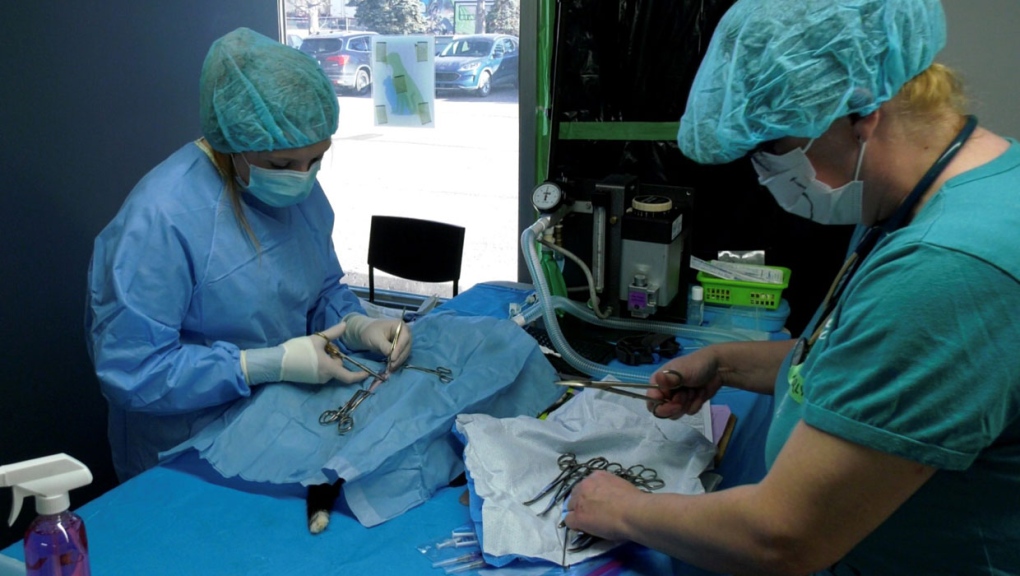 'PLEASE SPAY AND NEUTER YOUR ANIMALS'

About 25 volunteers came out to the spay and neuter clinic on Saturday in an effort to help cats in need, but also raise awareness of controlling the pet population.

Andrea McDonald has been working with cats for several years and urges people who are rescuing to make sure these procedures are done as soon as possible.

“There are thousands of animals each year that don't have homes, because where can they all go? There's only so many people so please spay and neuter your animals,” she said.

Bryony George, a local veterinarian that volunteered her time on Saturday, agrees that these surgeries are a much better alternative to what could be happening to less fortunate animals.

“This is a less crude method of population control that would maybe otherwise be implemented by people if their cats are out of control because owners sometimes tend to shoot them instead,” George said.

“It's nice to be able to donate my time to this because it’s kind of a win-win, getting to do more surgery. A lot of these people are training as well to be vet techs and assistants so they're learning loads too.”