Calgary boater rescues eagle from the middle of a B.C. lake

CALGARY -- A weekend getaway in B.C. for one Alberta man turned into an incredible experience for him when he came to the rescue of a giant eagle.

Brett Bacon, along with his partner and their child, were out boating on the lake near their cabin in Invermere, B.C. when he spotted something strange.

"We were just driving back from visiting some friends and I just thought it was a carpet in the water," he told CTV News in an interview Sunday.

As soon as he recognized it as a bird, saw its wingspan and even its head popping up, he knew what it was.

"It's not weird to see eagles and osprey go into the water to catch fish and then pop back up, but this thing was soaking wet and barely above the water."

Seeing the state of the bird, Bacon knew he needed to do something to help it out, so he brought his boat closer.

"It was a giant eagle. It was trying to swim and trying to fly away, but it just couldn't get out of the water. Eagles can actually get water-logged as compared to ospreys that can go in the water and get out."

He said the large bird's only chance to get out itself was by swimming but, because it was about a kilometre to shore in any direction, Bacon took action.

"After about fifteen minutes, I was actually able to grab the guy and bring him into the boat."

As soon as the bird was in the boat, he says it immediately took off and dropped into the water again.

"We needed to pick him up again. So we turned around."

This time out of the water, the eagle's talons ended up piercing his jacket as Bacon held him for the entire trip back to shore.

"He calmed down and just sat there and was so chill." 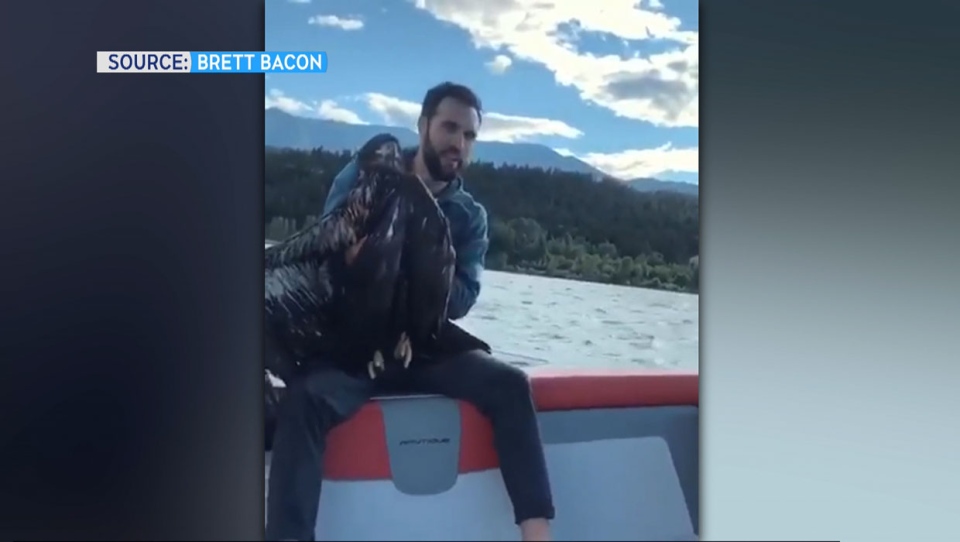 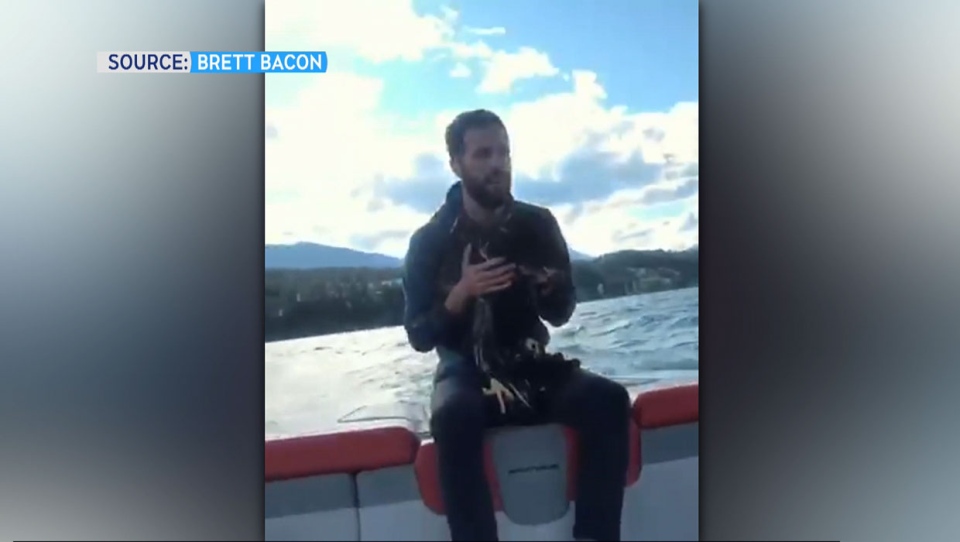 As Bacon's partner drove them the rest of the way to shore, they started to get looks from others.

"People must have just thought I had a dog on my lap, but from my hips to my head, he was the same height as me."

Bacon put the bird down on shore and watched it open its wings and try to dry off, which drew the attention of others.

"The whole community just came down to watch this eagle dry off."

Once the bird got dry enough to fly, Bacon says it took off and landed on another boat. He's glad it wasn't injured and was there to help out.

"You never get up close and personal with an eagle. People deal with a pigeon that's hit your window or a little bird," he said. "Holding an animal that's as wide as you are tall when it opens up its wings is a next-level experience.

"Animals can't say, 'Thank you' but you just feel really good. If you can help out an animal in need, I totally get why people dedicate their lives to this."

Wildlife officials made contact with Bacon a short time later and everyone was glad to know the bird would be okay.