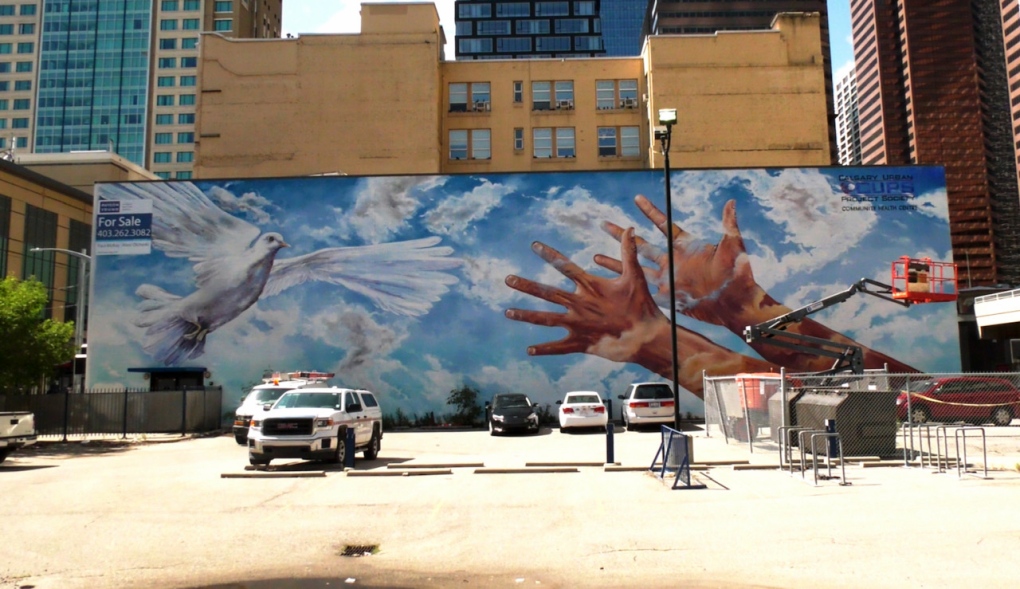 This mural, titled Giving Wings to the Dream, is slated to be replaced with a Black Lives Matter mural, which has sparked some controversy.

CALGARY -- A Calgary city councillor has concerns about a Black Lives Matter mural slated for downtown, which is planned to be the first of four art pieces funded by the city.

Coun. Diane Colley-Urquhart says she’s not in favour of the location chosen for the mural and says there hasn’t been enough public engagement about the project.

“The last thing in the world we need now is certainly controversy around the public art program,” she said.

“But probably more importantly, I would say, we don’t need controversy with Black Lives Matter and the type of public art we’re going to have.”

The first mural is slated to be painted on a wall at 1st Street and 7th Avenue S.E., across from the Centre Street LRT station.

It’s the current location of a mural named Giving Wings to the Dream, which was painted in 1995 by artist Doug Driediger.

The mural was painted for the Calgary Urban Project Society (CUPS) and was designed “as a symbol of hope,” according to Driediger’s website.

“We cannot change the mural that’s there,” said Colley-Urquhart, who adds her office has been receiving dozens of emails and phone calls from people concerned about the location of the artwork.

The Black Lives Matter mural series is a project by Pink Flamingo, artist Katie Green and filmmaker Suitaakii Black. The City of Calgary will provide $120,000 for the four murals in the series.

The first mural — the one set to replace the Giving Wings to the Dream piece — is slated to be completed in September and the group is accepting applications from artists until Aug. 17.

The new mural “aims to reflect the evolution of hope and what it looks like in today’s current context,” according to the project’s description.

CTV News has requested an interview with Pink Flamingo, but has not yet received a response.

An online petition calling for a different wall to be chosen for the mural garnered more than 100 signatures in the first four hours after it was posted.