CALGARY -- After recycling more than 150,000 mattresses in southern Alberta over the last five years, a Calgary mattress recycler wants to partner with the City of Calgary to divert every mattress destined for the dump.

How much space would that take, you ask?

“On a yearly basis, we have enough mattresses that we recycle right now that would fill up McMahon Stadium,” said Shawn Cable, business operations leader for Re-Matt.

“If we can get in to work with (the City) then I think we can 100 per cent divert every mattress that’s being discarded in the whole city," he added.

Re-Matt currently collects mattresses from Banff, Airdrie, Strathmore and even some southern municipalities in British Columbia, but does not operate at the City of Calgary landfill sites.

All the mattresses it collects are broken down at its warehouse in the Highfield neighbourhood.

The coil springs are collected and sent off for scrap metal or to smelters. Wood is broken down into shavings, foam is shredded and re-used as underlay for carpeting. The fabric materials are compacted and sent to landfill.

Cable says the mattresses that end up at landfills take up excessive space and slow down the decomposition process which he says is “essentially like burying air.” 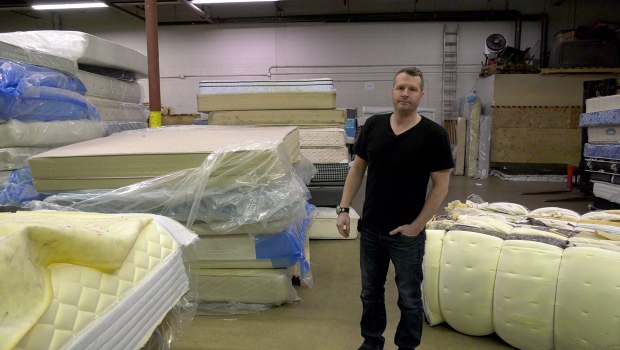 Ward 7 Councillor Druh Farrell said the city will look into it.

“We’re supposed to be meeting certain waste diversion targets within a certain period of time. As we learn more about recycling we need to add more of these services," Farrell said.

A City of Calgary spokesperson sent a statement to CTV News which stated that, “We encourage citizens to donate or ask their mattress retailer if they offer a recycling program or to contact local mattress recyclers (such as Re-Matt, fees apply). Citizens can bring large pieces of furniture like mattresses to the city landfill (landfill charges apply).

Calgary residents who wish to recycle their mattress in the meantime can do so by dropping it off directly at Re-Matt’s facilities for a $20 fee.