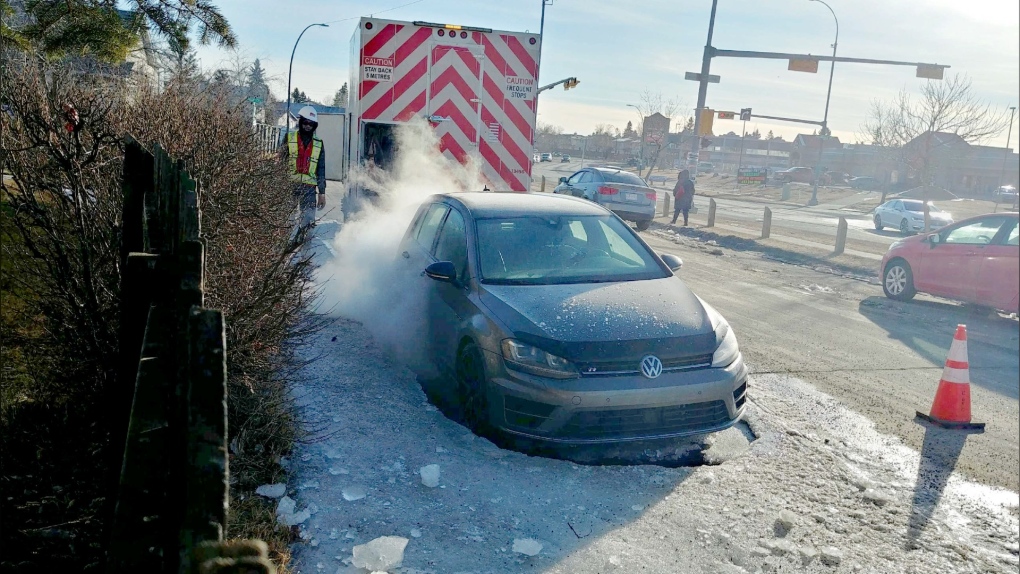 Less than 24 hours after CTV reported on a northeast Calgary water main break that had frozen a car to the ground, city crews have begun repairs and freed the vehicle.

Water poured down the back alley behind Falsby Court N.E. and onto the street last week, locking Nicolle Atherton‘s car in place.

The city initially said it wasn’t sure if the break was one of their lines, or was on private property.

Then on Thursday morning, they determined it was one of their pipes and crews began repairs.

Those crews also used high-pressure sprayers and a boiler truck to melt the ice which had trapped the car.

Just before noon Thursday, Atherton’s son was able to drive the car out of the loosened ice for the first time since it became encased to the frozen river of ice last Tuesday.

Amid protests, NRA meets in Texas after school massacre

The U.S. National Rifle Association began its annual convention in Houston amid protests Friday, three days after a gunman killed 19 students and two teachers at an elementary school on the other side of the state, renewing the national debate over gun violence.

NEW | 'Died of a broken heart': Can it really happen?

Johnny Depp's lawyers ask jury to give actor 'his life back'

Johnny Depp's lawyers asked a jury Friday 'to give Mr. Depp his life back' by finding that his ex-wife, Amber Heard, committed libel.

Iran's paramilitary Revolutionary Guard seized two Greek oil tankers Friday in helicopter-launched raids in the Persian Gulf, officials said. The action appeared to be retaliation for Athens' assistance in the U.S. seizure of crude oil from an Iranian-flagged tanker this week in the Mediterranean Sea over violating Washington's crushing sanctions on the Islamic Republic.

Monkeypox in Canada: Act now to stop it, expert urges, before it's too late

With 26 cases of monkeypox now confirmed in Canada, health officials warn that number will likely grow in the coming days and weeks. However, one expert says the outbreak can be stopped if the country works quickly to get it under control.