With heavy rains expected and flooding possible, a state of local emergency has been declared in Calgary and will be in place for 14 days, Mayor Jyoti Gondek announced Monday.

"I realize that may cause some fear, some anxiety for Calgarians, especially those who went through this in 2013," she said.

"I can tell you that you are in good hands."

The order can be rescinded or renewed, "as needed," said Gondek, and is being done "out of extreme caution."

Several pathways along the Bow and Elbow rivers have been closed, water pumps have been positioned and the Glenmore Reservoir has been lowered in anticipation of significant rainfall in Calgary.

The city has created an online map tool which shows areas of Calgary most impacted by flooding.

Declaring a state of local emergency was done for several reasons, said Gondek.

"First and foremost, it allows Calgary Police Service and Calgary Fire Department, as needed, to go door-to-door to advise people that they may be under an evauation order. No such order has been called yet, but if we need to evacuate people, this allows police and fire to advise people on properties that may be impacted." 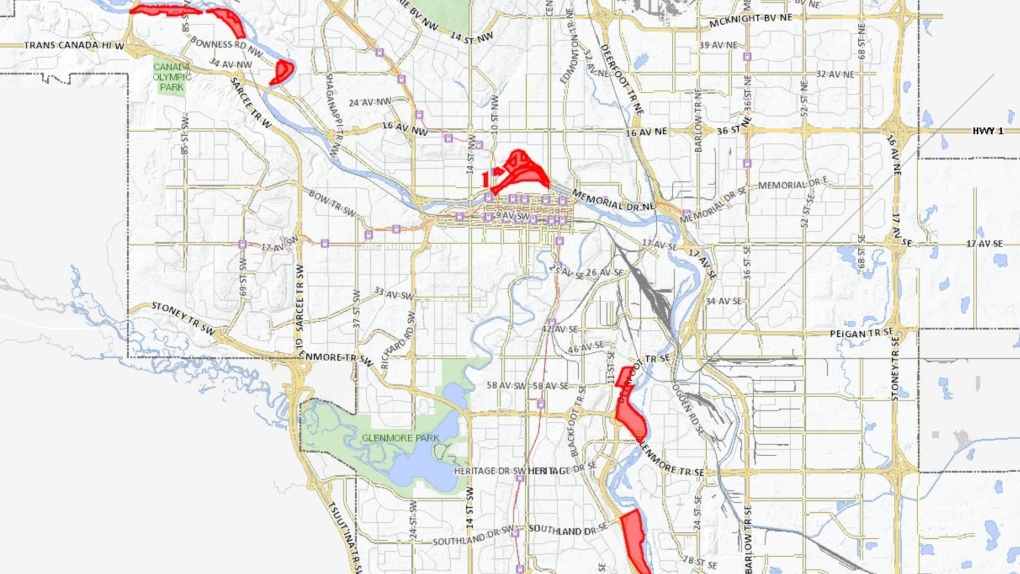 It also allows members of the city's water services team to access properties as needed to protect critical infrastructure, and offers "purchasing flexibility" to the city.

Gondek said current levels in the Bow River and Elbow River are "significantly lower" than they were during the 2013 flood event.

Some businesses are being proactive all the same, including the River Cafe in Prince's Island Park, which has been closed in case of flooding in the coming days, with staff removing perishable food on Monday afternoon, along with an extensive wine collection.

“After two damaging floods, we can’t just wait and see what happens, ” says owner Sal Howell. “We have friends in the community who will help store our food and wine until the river has receded.”

Rainfall warnings, as well as flood warnings, are also in effect in the foothills, through Banff, Kananaskis and Exshaw.

Though rainfall forecasts vary, CTV News Meteorologist Kevin Stanfield says between 80 and 100 millimetres of rain is set to fall by early Wednesday, while some areas could see upward of 150 mm.

Since the 2013 flood, more than $150 million has been invested in mitigation projects, which has reduced flood risk by 55 per cent, according to city officials.

Some of those projects include:

Calgary's downtown flood barrier is also complete and runs from the Peace Bridge to the Reconciliation Bridge and construction has started on the Springbank Off-stream Reservoir west of the city.

The protection put in place in the last nine years reduces Calgary's flood risk by about 55 per cent, according to the city.

Experts are still recommending people should remove valuable items and documents from basements if you're located near flood-prone areas, and test sump pumps to make sure they're working properly.