CALGARY -- Jared Bourne says he always wanted to live by the water.

That’s why he and his family were so excited to buy a house near a wetland in southeast Calgary seven years ago.

"It was beautiful, gorgeous," he says. "There were lots of birds, salamanders frogs – it was a dream."

Bourne says for several years, he, his wife and children enjoyed the sights and sounds of wildlife just steps from their backyard – but over the last few years, those sounds have been silenced, because the wetland has dried up.

"It is like having a mudpit, a huge eyesore in the back," Bourne told CTV News. "We don't get enjoyment out of barbecuing or using the yard. Even mowing the lawn was enjoyable before but not now." 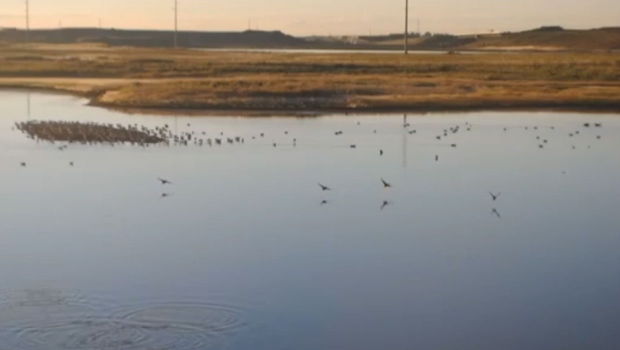 Bourne is a civil engineer and believes the wetland is dry because of a new storm pond built nearby as part of another housing development.

He says water runoff that normally would saturate the land behind his house is now sitting in the pond. To make matters worse, he says the loss of the wetland has affected his home's property value, to the tune of $80,000.

As a result, he’s complained to both the city and the province, asking for the pond to be modified or removed entirely.

However, the city says there's nothing wrong – the wetland is undergoing its natural cycle,

"We are in a prairie environment," says Chris Manderson with Calgary Parks. "Wetlands can dry up (and) we typically see that a couple years out of every 10 – wetlands go dry and, in fact, that’s part of their cycle, they need that for the health of the wetland itself."

Manderson also says he’s confident the wetland will be wet once again, likely within the next few years.

Alberta Environment also says staff have investigated the complaints and don’t believe the wetland has been affected by human behaviour.

However, Bourne says he’s not giving up and says he will pursue legal action if something isn't done about how the city approves construction around wetlands.