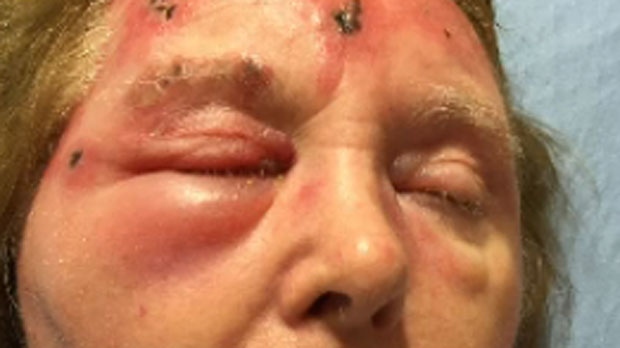 Irene Britton was hospitalized at Rockyview with a blistering, infected burn.

Advocates for seniors are claiming there are dangerous gaps in Alberta after a Calgary family voiced concerns about the level of care their mother is getting at a local nursing home.

The family of Irene Britton says she spent a day at a Stampede outing organized by her care home and when she returned she had a blistering, second degree sunburn which became dangerously infected.

Doctors say Britton’s condition has improved but Alberta Health Services has launched a safety review of the Father Lacombe Centre where she lives.

Alberta’s Health Minister, Sarah Hoffman, says her heart sank when she saw the pictures.  She says the issue has been raised with her staff and Hoffman says they’ll be reaching out to make sure Britton gets the care she needs in the interim.

The Province is pledging 2,000 new long term care beds over the next four years.