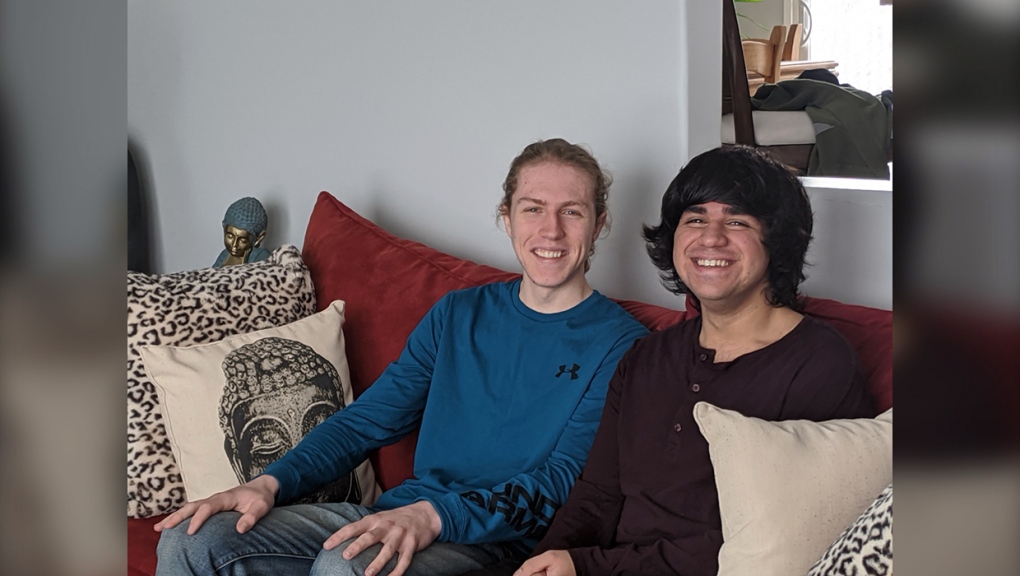 First year University of Lethbridge student Kieran Sayers helped out fellow student Teerth Anand, so that he could remain in Canada during the COVID-19 pandemic

LETHBRIDGE, ALTA. -- The shutdown of the University of Lethbridge due to the COVID-19 pandemic has led to lots of uncertainly for students, especially when it comes to living arrangements for international students.

About a month ago, Caroline Sayers's son Kieran, a first-year student at the U of L, had called her in Calgary to raise the possibility that campus could close as a result.

Kieran wasn't worried about himself when the decision ultimately came down. Instead, he was concerned about his friend Teerth Anand, a first-year international student from India.

Anand would've had extreme difficulty getting back to his family due to travel disruptions, and adding to his problems, the visa that allows him to study at the U of L mandates that he stay in Canada.

After getting the rundown, Sayers says as a family, they decided they would help him out.

"He was instantly grateful and said, of course, he'd like to stay with us," Sayers said. "We're currently providing free room and board for him at our home in Calgary."

The family has helped turn what could've been a much more difficult situation into an easier one for everyone involved, something Anand's parents in India were thankful for as well.

"We had a call from his mother and sister in Delhi the other day, and they said how happy they were," she said. "Obviously they trust the situation that he's in a good home, he's safe, and he can be happy with us here."

Sayers and Anand are both in their first year of post-secondary education. They only met on campus about three months ago. Neither was too gung-ho to leave school, waiting until the final word from faculty on classes being cancelled.

They've been back in Calgary for about a week, which has made things a bit tricky at the Sayers' home on an acreage, but they're managing.

"It's a little bit difficult from the point of view of getting them on a good schedule to do their course work. They're sleeping all over the place, they're both 18 and kind of have other things on their minds, but they're on lockdown as well," Sayers said.

Caroline runs her business from home, and her husband Derek has been working from home for a while now, so she's thankful for the extra space at their home because there's plenty of room for everyone to socially distance while still getting their work done.

Ultimately, the Sayers felt it was the right thing to do, and it's a benefit for the boys because they have someone to hang around with at a time when so many are socially isolated.