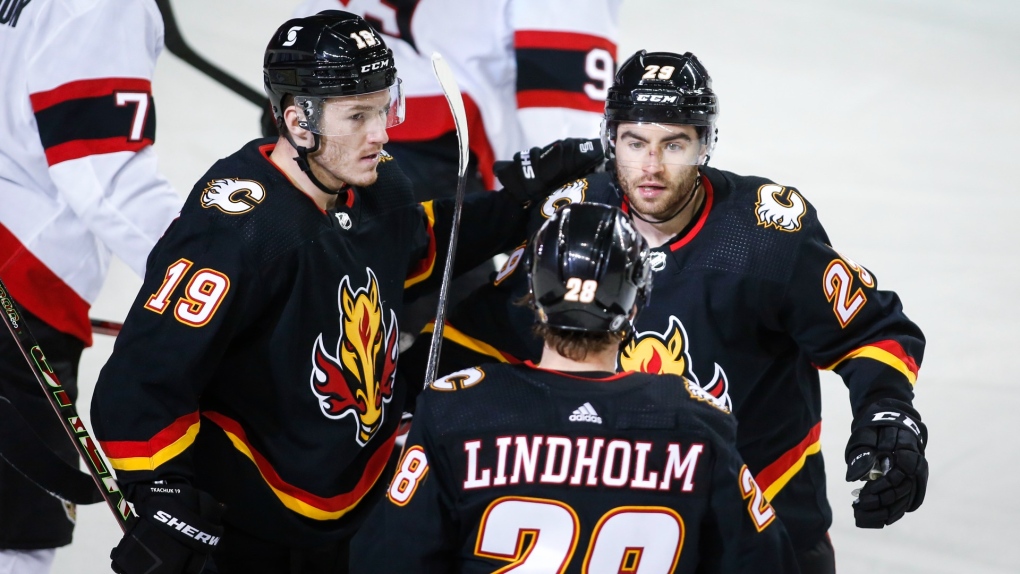 CALGARY -- Dillon Dube's first career NHL hat trick for Calgary in a 7-3 win over the Ottawa Senators on Thursday was eclipsed by the post-game firing of Flames head coach Geoff Ward and the hiring Darryl Sutter as his replacement.

An hour after Calgary's win to get to 11-11-2 on the season, the Flames announced Ward's sacking and the return of Sutter, who was Calgary's coach and general manager between 2002 and 2010.

The Flames have been inconsistent this pandemic-shortened season and are two points back of the fourth-place Montreal Canadiens in the North Division.

Calgary was listless in a 5-1 loss Monday to the Senators in Ottawa, but was the dominant team Thursday.

Dube didn't get a shower of hats from the Saddledome seats for his first career NHL hat trick, but his teammates helped him mark the occasion.

Matthew Tkachuk retrieved the puck out of the Senators net for Dube to keep. Goaltender Jacob Markstrom tossed his ball cap from the bench onto the ice.

"Markie throwing his hat, I appreciate it,” Dube said. “I picked it up for him and gave it back. I didn't want it to get too wet."

Dube scored a goal in each period in the win.

"“It feels good, but anything at this time, with our division right now, I think winning is kind of everything and that makes it feel even better," the 22-year-old said.

"If you lost the game and you get that, it doesn't mean anything. To be able to get the win with it feels really good, especially here at home."

Sean Monahan, Derek Ryan and Brett Ritchie each had a goal and an assist for Calgary with Josh Leivo chipping in a goal. Tkachuk assisted on all three Dube goals.

David Rittich made 29 saves for the win in his sixth straight start. He's gone 3-2-1 in that span.

Josh Norris had a goal and an assist for the Senators (8-17-6) in their second straight loss since beating the Flames 5-1 at home Monday.

"Looked to me like we had no legs certainly at the start and right on through looked like we were skating uphill," Senators head coach D.J. Smith said.

"We maybe found it for a few minutes here and there, but as a whole we just didn't have much tonight."

After giving up four goals on 11 shots in the first period, Ottawa starter Matt Murray was replaced by Joey Daccord for the remaining 40 minutes. Daccord turned away 15-of-18 shots.

"There was no point for me to keep Matt going there," Smith said. "Give him a breather, and we'll get back at it next game."

Calgary and Ottawa are 2-2 with five games remaining this season in their North Division series. The winner in each of the first four has scored at least five goals in the game.

Dube completed his hat trick at 1:17 of the third period to give the Flames a 6-1 lead. The Senators then scored twice before Ryan produced his first goal of the season in his first game in a month.

Ryan, who was sidelined 12 games with a broken finger, roofed the puck at 7:05.

Dzingal scored on a solo effort at the six-minute mark after the puck bounced over the stick of Flames defenceman Oliver Kylington.

Anisimov scored a power-play goal for the Sens on a sharp-angled shot at 2:13.

Dube went forehand to backhand and lifted the puck over Daccord's left pad at 7:16 of the second period.

Two quick and early goals spurred the Flames to a 4-1 lead after 20 minutes.

Leivo earned his first as a Flame with 39 seconds remaining in the period. Ottawa turned the puck over along the boards for Johnny Gaudreau to feed Leivo in the high slot.

Monahan snared a Tim Stutzle neutral-zone turnover, skated the puck over the blue-line and beat Murray with a high shot far side at 11:56.

Norris shovelled the puck under Rittich in a goal-mouth scrum at 5:25.

The hosts sprang from the gates with Ritchie and Dube both scoring in a 57-second span starting at 2:22 of the first period.

"It was a good start for us," Ward said after the game and before his dismissal. "I thought we were purposeful. I thought we had energy. I thought were emotionally engaged and attached to the hockey game."

The Flames are in Edmonton on Saturday to face the Oilers before coming home to host the Senators again on Sunday, which will be Ottawa's third in a six-game road swing.