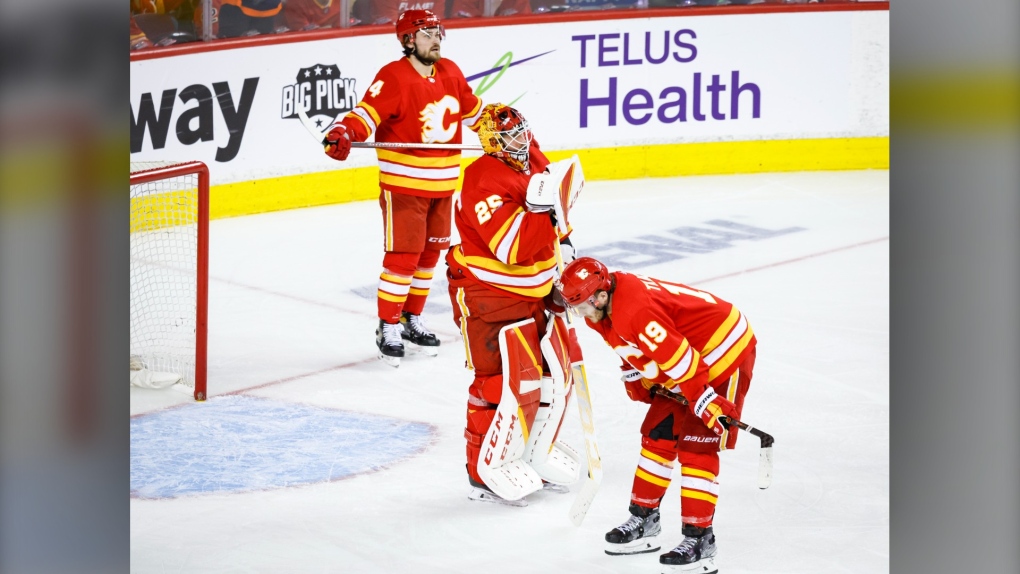 The Calgary Flames didn't go quietly, but they still went with the controversial disallowing of a potential game-winning goal hanging over their exit.

Edmonton Oilers captain Connor McDavid scoring the overtime winner at 5:03 on a feed from Leon Draisaitl for a 5-4 win Thursday stuck the dagger in Calgary's hopes of extending the NHL's first playoff Battle of Alberta in 31 years.

Edmonton awaits the winner of the other semifinal between the Colorado Avalanche and St. Louis Blues to know their conference final opponent.

Thursday's Game 5 was tied 4-4 heading into the third period. Calgary's Saddledome erupted when the puck laying near the goal-line went off Flames forward Blake Coleman's skate and into the net as he was pushed into the crease by Oilers defenceman Cody Ceci with six minutes remaining in regulation.

Officials reviewed the goal and ruled the puck was kicked in. Debate over whether it should have stood will circulate for some time among disappointed Flames fans.

"If you slide your foot in the ground, it's not a distinct kicking motion."

Said Coleman: "I opened my foot, but my understanding is that you can redirect the puck off your foot as long as you're not lifting it and kicking it into the net. I'll go watch it again and maybe it's glaringly obvious. I just didn't feel like I did."

Leading 2-0 and 4-3 in the second period, Calgary was the better team in the faceoff circle Thursday, winning 67 per cent of draws.

Calgary was holding McDavid off the scoresheet for the first game in the series until his OT winner.

"He can make anything out of nothing and he's very hard to play against," Backlund said.

There was little to choose between the two clubs in Game 5, but the Oilers came through in the tough moments of the series.

"Quite honest, the series was about Games 2, Games 4 and Games 5, which is tonight, they were all tied in the third period halfway through," Sutter said. "Edmonton scored the big goal."

Calgary's power play was 2-for-14 overall compared to Edmonton's 4-for-20.

"It's hard, but I don't think we lost this series today," Backlund said.

"Games 2 and 3 got away from us. Even Game 1, we were up 6-2, we should kill the first game right there. Don't give the big guns any free confidence."

Edmonton's top two producers — McDavid and Draisaitl — combined for five goals and 24 assists in the series.

Behind McDavid and Draisaitl, the Oilers boasted more timely secondary scoring from Evander Kane, Zach Hyman and Ryan Nugent-Hopkins throughout the series.

"I think we all believed we had a deep run in us," Coleman said. "You've got to give Edmonton credit. I thought their big guys played a big series. They had some depth. They made plays in key moments of games and we didn't.

"You look at a lot of games that were tight in the third and we just couldn't come up with that big play to put us over the hump in the last couple games."

The series featured goaltending that veered from brilliant to mediocre and back again from both Markstrom and Edmonton's Mike Smith.

Despite a few soft goals and an early hook in Game 1, the 40-year-old Smith outplayed Calgary's goaltender when it counted.

"If you guys want to criticize, I'm not doing it," Sutter said of Markstrom. "He had a hell of a year. He's one of our captains, one of our leaders. We won 55 games and how many did he win? Most of them."

After what appeared to be a right-shoulder injury in Game 6 against Dallas, Calgary's top shutdown defenceman played in pain when he returned to the lineup for the fourth and fifth games of the series against Edmonton.

The 2022 Flames changed the narrative somewhat on their reputation for playoff fragility by winning a round for the first time in seven years, and doing it with a Game 7 overtime win over the Dallas Stars in the conference quarterfinal.

Calgary was quickly swept in the first round in 2018 followed by a five-game upset at the hands of the Colorado Avalanche after topping the Western Conference in 2019.

The Flames exited the first round two years ago when they squandered a 3-0 lead to lose 7-3 in Game 6 to Dallas.

Calgary hasn't made it past the second round in 18 years. Sutter coached the Flames to the Stanley Cup final in 2004 when they fell to the Tampa Bay Lightning in seven games.

Calgary (50-21-11) topped the Pacific Division in Sutter's first full season back behind the bench following his rehiring in March, 2021, with one more regulation win than Edmonton.

These Flames were constructed for a long playoff run in 2022 starting with the $6-million-a-year Markstrom in net.

Recognizing a lack of playoff experience, Flames GM Brad Treliving augmented his maturing talents — Gaudreau, Tkachuk and Lindholm were all 40-goal scorers for the first time in their careers — with Cup winners or finalists Toffoli, Coleman, Jarnkrok and Trevor Lewis.

Both will command significant raises on their previous contracts after career years. Gaudreau signed a six-year, US$40.5-million contract in 2016, while Tkachuk agreed to a three-year, $21-million deal in 2019.

A powerful 7.8 magnitude earthquake rocked wide swaths of Turkiye and neighbouring Syria on Monday, killing more than 2,600 people and injuring thousands more as it toppled thousands of buildings and trapped residents under mounds of rubble.

As preparations are underway for the anticipated health-care 'working meeting' between Prime Minister Justin Trudeau and Canada's premiers on Tuesday, new details are emerging about how provinces anticipate the talks will unfold.

February's full snow moon, which first appeared this weekend, will light up the sky over the next two nights, with the spectacle already reaching full illumination on Sunday morning. But this year's full moon was smaller than those of recent years.

Google says Canadian employees affected by recently announced job cuts are being told today whether they have been laid off.

The lawyer representing a former medical student accused of murder says her client will testify that he shot another student in self-defence when a drug deal in Halifax turned violent.