Calgary’s Folk Festival is ramping up its environmental initiatives as it prepares to host more than 40,000 people this weekend, marking the first in-person event in three years.

Prince’s Island Park is expected to be filled to the max with music lovers, street vendors, and about 100 volunteers which means a lot of extra trash can be expected.

To mitigate waste, folk fest organizers have set aside several recycling, garbage, and compost stations which are clearly labelled for attendees of the event.

Five free water stations allow people to re-use their own personal bottles to lower their environmental footprint and each vendor is required to offer their food in compostable containers.

Calgary Folk Fest executive director Sara Leishman said the event has prided itself on its eco-initiatives for decades, going all the way back to its reusable plate program which has evolved over the decades.

“With these initiatives, we manage to divert between 80 and 90 per cent of the waste that is generated on site,” Leishman said.

“That's everything from of course your food, compostable items, the apple cores, to your refundable beverage containers. One of the key parts of being able to divert from the landfill of course is not just the ability to recycle but to head it off at the pass entirely which is why we also have those refillable water stations.”

The impact is already being noticed by long-time folk fest fanatics like Ed Penny who has been attending the festival ever since it first was introduced in 1980.

“In here you have your refundable plates, they urge you to bring your own water bottles, everything to save the environment,” he said.

“I’ve seen this event graduate from throw away plates, but now they’re doing everything they can.”

Other attendees like Sibavaughn Wiley agree that the event has come a long way in reducing its environmental impact even as its grown its cultural one.

“I started volunteering for the festival a very long time ago and for 20 years saw on the inside a constant dedication to evolving for the environment and I think that’s critical,” she said.

“Every time I come back now, it's making gains in terms of minimizing its impact and it seems like they really just keep it first and foremost in their strategic planning.”

Calgary Folk Festival runs from July 21 to July 24 with the gates at Prince’s Island Park officially opening Thursday at 4:30 p.m.

By the end of this year, all companies in Canada will be barred from importing or manufacturing single use plastic items such as bags, stir sticks, straws, six-pack rings, and takeout containers.

It’s why one Calgary company is looking to get ahead of the game as it begins to manufacture and distribute its own fully compostable meat trays and clamshell containers locally.

Dulce Vita is a corporation that specializes in creating the containers and trays out of 100 per cent Canadian softwood and hardwood that is mixed, molded and dried.

About 1,000 containers and trays are made each day according to corporation director Gabriel Olivella. 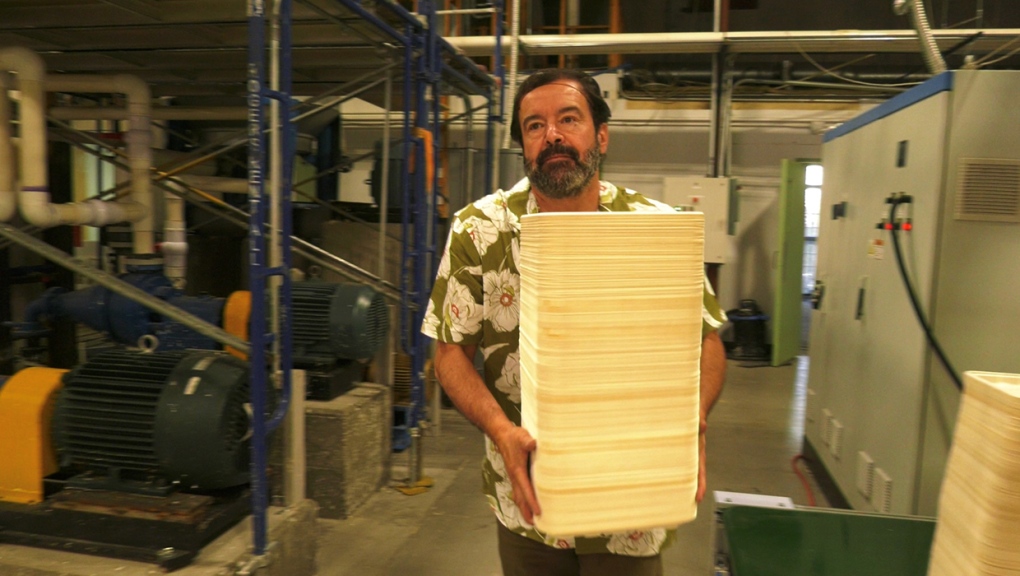 About 1,000 containers and trays are made each day according to corporation director Gabriel Olivella.

“We are free of any harmful components like BFAs, also known as forever chemicals so we're going to get ahead of legislation when it comes to compostable biodegradable products,” he said.

“It’s all made here in Calgary with all raw material also produced here in Canada.”