Amir Abdulrahman was sentenced to five years in prison Friday after pleading guilty to manslaughter in the New Year's Eve death of Calgary police officer Sgt. Andrew Harnett one year ago.

The 20-year-old was a passenger in an SUV Harnett had stopped in the northeast community of Falconridge on Dec. 31, 2020 after noticing its license plate didn’t match its registration.

The vehicle took off, dragging 37-year-old Harnett 437 metres before he fell and ended up in the path of an oncoming car.

Two other officers tried to revive him, but he died an hour after the incident.

Abdulrahman was originally charged with first-degree murder but pleaded guilty to manslaughter before Court of Queen’s Bench Justice Robert Hall in December.

Crown prosecutor Mike Ewenson had asked for an eight- to nine-year prison term, while defence lawyer Balfour Der argued his client should receive a two-year jail term followed by two years of probation.

Hall provided a lengthy reasoning for his decision of a five-year sentence for Abdulrahman, noting that his original decision was six years, which was reduced by one full year because of his guilty plea.

Since Abdulrahman had already spent 386 days in remand, he was credited for time served on a one-and-a-half time basis, equaling 579 days. That means his remaining time in prison will be 1,246 days or roughly three years and five months.

Hall also noted he believes Abdulrahman is "very remorseful" of his crime and will have a chance at rehabilitation with the support of his family members.

The judge additionally said Abdulrahman’s participation was largely "impulsive and spontaneous or reactionary" and that he was taken off guard by the youth driver who sped away from the traffic stop.

“It is unknown how and when precisely, the driver formulated his plan to flee from the authorities and the crown concedes it has no proof that the offender was involved in any planning of the initial fight and I therefore do not presume that he was,” Hall said.

“But in my view, the offender still provided assistance to the driver, knowing that they were traveling down a major roadway with oncoming traffic, while a police officer was holding on to the vehicle. The body camera footage shows that he also would have known that the driver was engaged in an ongoing attempt to dislodge the officer from the vehicle.

“I find that the offender proceeded with the unlawful act either knowingly or being willfully blind to the possibility that in the circumstances, the fight was likely to put Sgt. Harnett at risk or cause either serious bodily injury or life-threatening injury.” 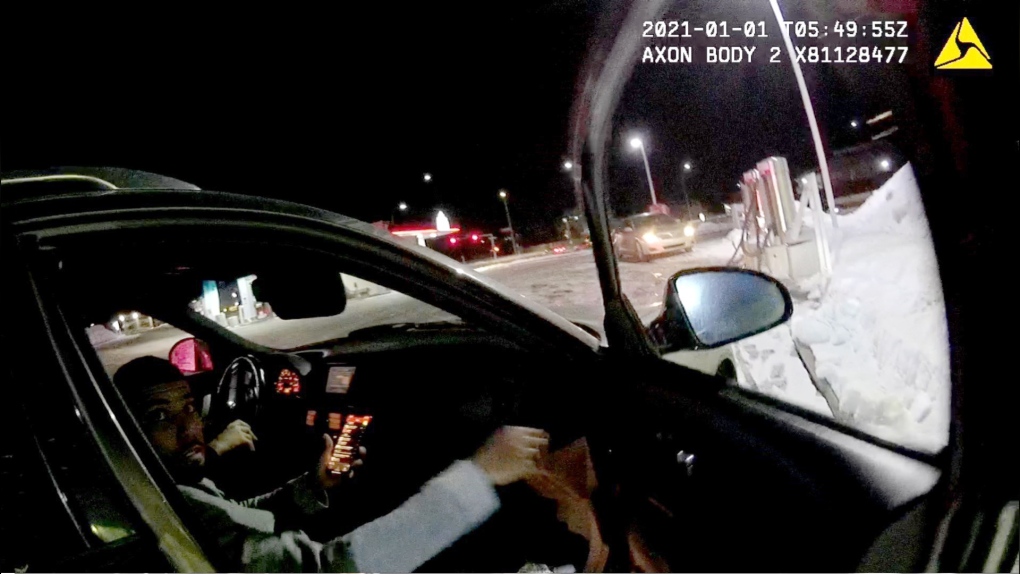 Image from a Calgary police body camera approved for release by Crown prosecutors and defence lawyers relating to the death of Sgt. Andrew Harnett during a traffic stop on Dec. 31, 2020. (Court Exhibit)

The youth police allege was driving at the time of Harnett’s death is slated to start a trial by judge on Jan 31. He was 17 years old at the time and cannot be named under the Youth Criminal Justice Act.

CTV News reached out to Calgary police for comment on the sentence, but was told the service will reserve any comments until the full trial proceedings of the youth driver are completed out of respect for the Harnett family and ongoing court matters.

Following the sentence, Crown prosecutor Mike Ewenson told reporters he was "disappointed" in the judge’s decision and felt his request of an eight- to nine-year sentence for Abdulrahman was more appropriate for the crime committed.

“We felt that sentence took into account his age, his guilty plea, but most importantly we felt that that took into account the grave risks that police officers face anytime they're on shift, and that's no more evidence in this case, this was supposed to be a routine traffic stop,” Ewenson said.

“I think his role clearly was more minimal than the driver. I think that's common sense, but nonetheless, he did play a role. He was a party to this offense and his role and his actions were part of the causation to Sgt. Harnett’s death.”

Ewenson added he stands with police officers and the risks they place themselves in anytime they put on a uniform, noting that the case law recognizes sentences need to deter and denounce any sort of violence against officers in the community.

Ewenson’s focus will now shift to the trial of the youth driver set to begin on Monday.

'HE IS VERY REMORSEFUL': DEFENCE

Defence lawyer Balfour Der said the sentence was higher than he had hoped for due to what he called Abdulrahman’s "minimal involvement."

"I can certainly understand how the judge came to that decision,” he said.

“My client expressed to me that he was very respectful of the judge’s decision and the police and that he understood why sentences involving police officers are higher and so for a young man who is just 20-years-old, he has great insight into what happened and he is very remorseful.”

Der adds this incident has changed the personality of Abdulrahman and placed him on a better path forward.

“He was hanging with a bad crowd when this occurred and I don’t expect that his shadow will ever darken the doorstep of a court house ever again," he said.

There are now 30 days in which an appeal could be launched against this sentence, but Der says he does not foresee that taking place and that his client will take responsibility for his action.

The white gunman accused of massacring 10 Black people at a Buffalo supermarket wrote as far back as November about staging a livestreamed attack on African Americans.

Progressive Conservative Leader Doug Ford faced a barrage of attacks from the other three major party leaders in the Ontario election debate Monday.

'Aquaman' actor Amber Heard told jurors in a defamation case on Monday that she filed for divorce from Johnny Depp in 2016 because she worried she would not survive physical abuse by him.