Five-years ago a number of communities in Calgary and southern Alberta were overcome by flood waters and since then the city has invested over $150 million in projects to reduce the risk of damage from future floods.

Fast-moving flood waters displaced more than 100,000 people in June of 2013 and caused an estimated $5 billion in damage to properties and infrastructure in Calgary and southern Alberta.

The city declared a State of Emergency and people from across the country came to the province to help put it back together again.

City crews collected about 100,000 tonnes of debris in the days and months that followed and work was started almost immediately to repair roads, pathways, transit routes, city buildings and homes in affected communities.

Since then the city has been working on a plan to manage river flood risks and build more flood-resilient communities.

“Five years ago, today, we undertook one of the largest evacuations in Canadian history, all along the south bank of the Bow River. I remember standing just on the opposite side of the river, 2:00 in the morning. It was dark, we’d turned all the electricity off as a precaution and all I could hear was the river. I cross that river every single day, I grew up here. Like for all of us, that river is a part of my blood stream, it’s a part of my DNA, and I had never seen the river run so fast, so high and so angry before and all I could hear is the rush of the water and I gotta tell you, I was a little bit scared. That was the first time, in the crisis at two in the morning, that I was scared for the future of the city,” said Mayor Naheed Nenshi.

Nenshi says the response from first responders, city crews and members of the community was amazing to watch.

“It was the most remarkable outpouring of humanity I’ve ever seen and it’s one that showed the world who and what we truly are,” he said.

Over $150 million has been invested in a number of projects and officials say the initiatives have reduced the risk of damage from river flooding by one-third since 2013.

“Five years after the flood, it’s easy for politicians to say, why should we invest in something that we may not use or that we may not use during my time in office? Why should we invest in something for the long-term when we have so many short-term priorities that take precedence? But we have to remember that there is no higher priority than keeping people, industry, residences and critical infrastructure in the city safe,” said Nenshi.

Flooding is most likely to happen between May 15 and July 15 and there are a number of things people can do to prepare and protect their properties from flooding.

Join Tara Nelson tonight at six, live from the banks of the Bow, for an in-depth look at the devastation, the recovery and the plans to reduce the risk of damage from floods in the future.

For more information on Flooding in Calgary and how to prepare for flood conditions, click HERE. 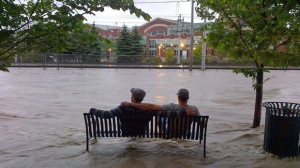