CALGARY -- For the fourth year in a row, the Calgary Police Service is initiating Operation Cold Start to help inform and educate the public about leaving their vehicles running and unattended.

Investigators say many vehicles are stolen each year by thieves who merely lie in wait for unsuspecting car owners to leave their vehicles running with the keys inside.

According to police, it only takes a minute for the crime to take place.

Tomorrow, December 12, we will be commencing our annual #OperationColdStart as a way to educate citizens about vehicle warm-up thefts.

For Operation Cold Start, officers patrol communities looking for vehicles that are easy targets for criminals.

When they come across these vehicles, they take the time to speak with the driver to tell them about how close they came to becoming a victim.

"This is our fourth year running Operation Cold Start and many Calgarians seem to be getting the message. However, we still continue to see warm-up thefts occurring on a daily basis during the winter months," said Staff Sgt. Graeme Smiley of the CPS District Support Unit in a release.

"We are asking citizens to help us reduce the number of auto thefts by using a remote starter or staying with their vehicle while it warms up."

In the first nine months of 2018, just over 4,500 passenger vehicles were stolen in Calgary. 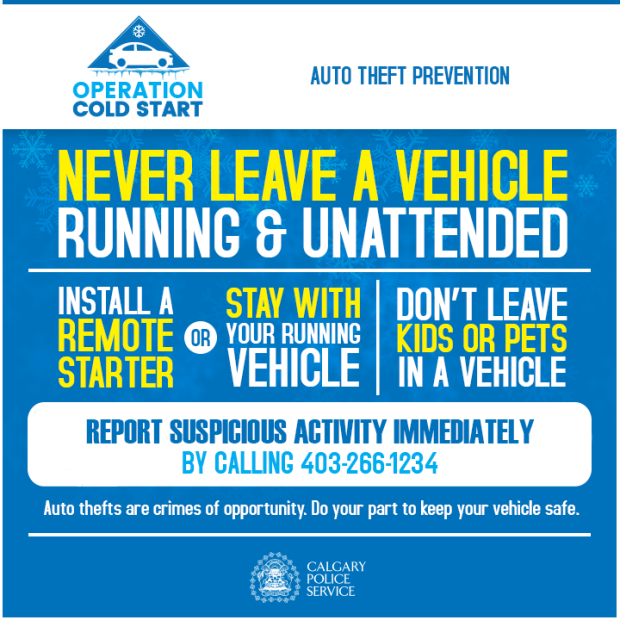