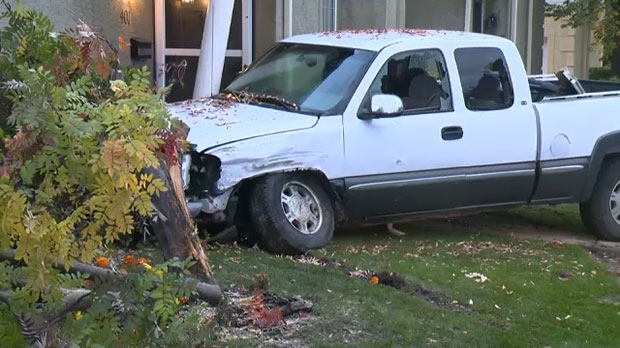 Police say the vehicle was being driven erratically at times before it crashed into a home the in the northwest on September 25, 2018.

Alberta's police watchdog has cleared a Calgary Police Service (CPS) officer of any wrongdoing after he fired several shots at a stolen truck being driven erratically in the community of Martindale back in 2018.

A report on the incident released by the Alberta Serious Incident Response Team (ASIRT) on Thursday examined what happened leading up to the shooting.

The officer in question was patrolling northeast Calgary in a marked police cruiser with a second officer on the evening of the shooting, which occurred on Sept. 24.

According to the report, the pair checked the licence plate of a white GMC truck and determined it was stolen. The officers didn't attempt to stop the truck, and instead followed it while waiting for backup.

Though they lost sight of the truck at 11:33 p.m., the officers were able to locate it three minutes later, parked in front of the driveway of a home in Martindale.

The officers pulled up and parked behind the truck, exited their cruiser and began approaching the vehicle.

The report says both officers drew their firearms after seeing the driver "raise his hands briefly."

Instead of surrendering, the driver started the truck, drove it forward onto the driveway, then "quickly reversed" the vehicle – coming close to hitting the second officer.

The driver continued backing up, clipping the police cruiser before driving onto the lawns of adjacent houses and hitting a nearby garage.

The officer in question fired five shots at the truck, hitting the front passenger-side tire, but the driver continued on.

With the use of the HAWCS helicopter, police followed the truck's movements as it travelled through residential neighbourhoods and eventually lost control and came to rest on the front yard of a home.

Officers, with the help of a police dog, arrested the suspect.

His only injures were "superficial lacerations from the dog bite."

ASIRT noted in its report that the evidence available in the investigation was "more limited than other similar investigations" as neither the officer who fired the shots nor the driver of the stolen truck provided a statement to investigators.

In addition, ASIRT said the video camera in the police cruiser wasn't recording at the time of the shooting, as the camera is activated by the vehicle’s emergency lights – which weren't on.

As such, most of the evidence from the investigation came from the second officer.

DRIVER WAS A 'SERIOUS RISK'

ASIRT concluded the suspect was "driving very erratically, and apparently unable to avoid hitting a garage" adding he was a "serious risk to the officers on foot around him."

Police officers are permitted to use as much force as is necessary for execution of their duties, and ASIRT found the of force by the officer was proportionate, necessary, and reasonable.

"As a result, there are no reasonable grounds to believe that a criminal offence was committed."