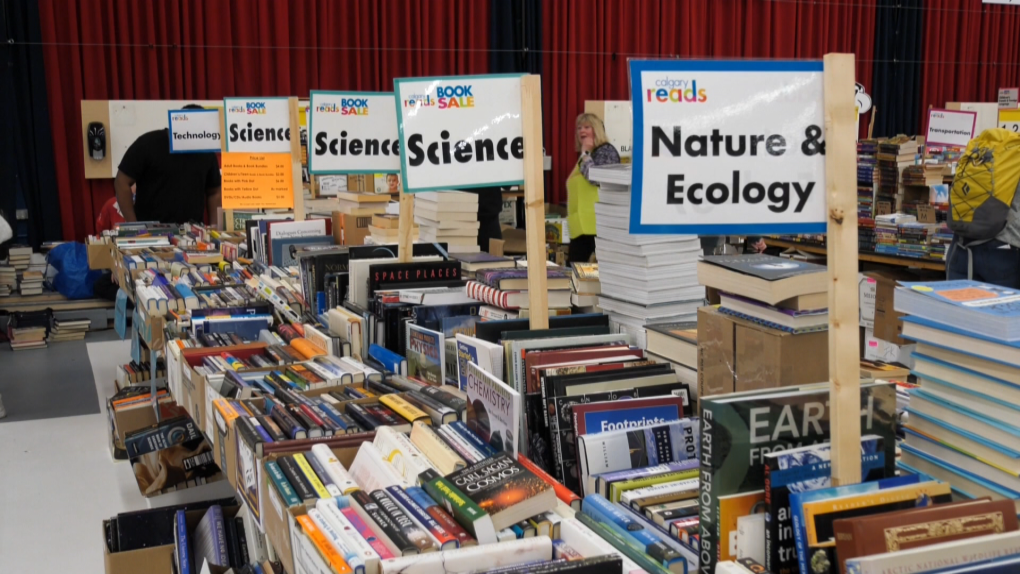 Roughly 150,000 used books are up for grabs as the Calgary Reads Big Book Sale is back and child literacy programs in the city are set to benefit.

The event, now in its 18th year, kicks off Friday at the Calgary Curling Club (720 Third Street N.W., located along Memorial Drive near the Prince's Island bridge) and will run through May 16.

"This is THE big book sale. It bigger and better than ever. We're super excited to be back after two years of not being able to have a book sale," explained Steacy Pinney, CEO of Calgary Reads.  "Hopefully it will get busier and busier as each day goes by. We will replenish the books so if you can't get here for five more days, that's OK, there will be more books that keep being brought out."

Proceeds from the sales will help Calgary Reads, an organization that promotes and encourages childhood literacy and places books in the tiniest of hands — from six-month olds to Grade 3 students.

"People love reading and they love getting their hands on books. I think they also love supporting a beloved cause and Calgary Reads touches people's hearts. Who wouldn't want to contribute to the education of young children? They're our future."

"We have 25 per cent of kids in Canada growing up with no books in their home and that's just going to follow them for the rest of their lives, to be disadvantaged in (many) ways."

Pinney says the book sale is expected to draw roughly 10,000 customers over the 11 days and 1,200 people are volunteering their time to help the cause.

"We have it down to a science. I have the most amazing volunteer team who lead the sale. We're a very small staff at Calgary Reads so we're dependent on these 1,200 volunteers to make it happen. And we have a committee of "The Magic 12" who've been doing this for at least a decade and they're the brains behind 'How's the flow? What are the book categories? How's cash going to work this year?' They're amazing. We're so, so grateful that they keep coming back year after year."

The final day of the sale is dubbed the 'unsold event' where schools, charities and little free library stewards who preregister by sending an email to info@calgaryreads.com may take as many books as they like at no charge.

Calgary Reads collects children's books year round at its Little Red Reading House in Inglewood but non-children's books are only accepted at designated location in the weeks leading up to each year's book sale.