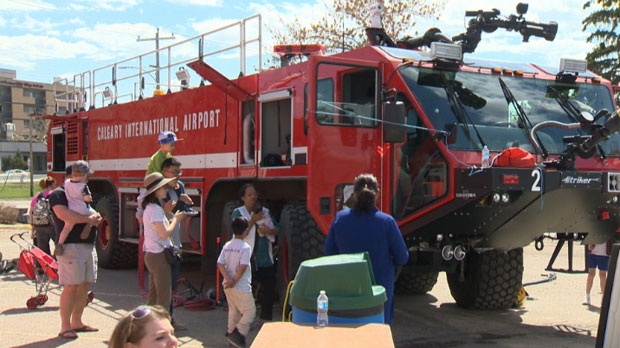 Crowds of people checked out the rescue equipment at the Disaster Alley event at McMahon Stadium.

Calgarians learned about what to do in the event of a disaster at the event which marks Emergency Preparedness Week.

They could tour emergency vehicles and check out the equipment that crews use to save lives.

“Our mobile command vehicle is the most popular event, of course, it’s a new vehicle, it’s interesting and the public is very interested to go inside and find out what’s it’s all about,” said Insp. Chris Butler, Calgary Police Service.

There were more than 30 exhibitors who provide assistance in emergencies and disasters. The event is an important part of demystifying what emergency responders do, and help people understand what they must do.

“When bad things happen to us, the ability first of all to cope when a tragedy occurs depends upon the ability of what we call immediate responders are for civilians to react effectively initially, and then resiliency to be able to recover quickly and get back to a state of normalcy, which is what the strength of the community is all about,” said Insp. Butler.

It was about more than just education of course, there was plenty of fun too, including a chance to ride on a mini-train and talk to the crews.

“I got arrested from a policeman,” said five-year-old Wyatt. “And I escaped!”

“Many of the police officers that we recruit now, they’re at that age where they speak back to events like this where they had a positive interaction with a police officer or a firefighter  that really encouraged them,” said Insp. Butler.

The Disaster Alley event goes every year on a national level to help build a culture of preparedness in Canada. You can learn more here.