Calgary sculpture that scorched someone's jacket back on display in June

Calgary sculpture that scorched someone's jacket back on display in June 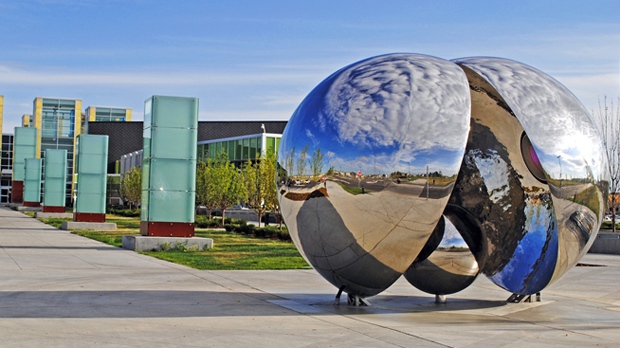 A piece of public art that was removed and placed into storage after burning a hole through an onlooker's jacket will soon be reinstalled in a new location.

The art, called The Wishing Well, was originally erected outside the Genesis Centre in the city's northeast in 2012.

A year later, someone admiring the spherical polished stainless steel statue complained her coat had been scorched by the refraction of the sun’s rays.

Living Lenses, the San Francisco-based artists who created the structure, attempted to fix the issue, but the piece was removed in 2014.

"Since then, we’ve been working with engineers and scientists to conduct reflective sunlight studies and outline design requirements for a suitable new location," said the City of Calgary in a news release.

On Monday, city officials and developer JEMM Properties announced that Wishing Well would be relocated to Bridgeland in June.

The art installation will sit outside Bridge, a new living space and retail plaza in the 900 block of McPherson Square N.E.

The relocation comes "at no additional cost to Calgary taxpayers," said a city news release.

“This was accomplished through a public-private partnership, which provided opportunities for cost sharing and additionally made certain the sculpture is in a safe new location," Ward 9 Coun. Gian-Carlo Carra said.

"Samples of this non-reflective coating have been successfully tested in a controlled lab environment," a news release explained.

City officials also say the new location and origination of the sculpture "greatly reduces" sunlight reflections for nearby drivers and pedestrians.

North Korea on Sunday fired a short-range ballistic missile toward its eastern seas, extending a provocative streak in weapons testing as a U.S. aircraft carrier visits South Korea for joint military exercises in response to the North's growing nuclear threat.