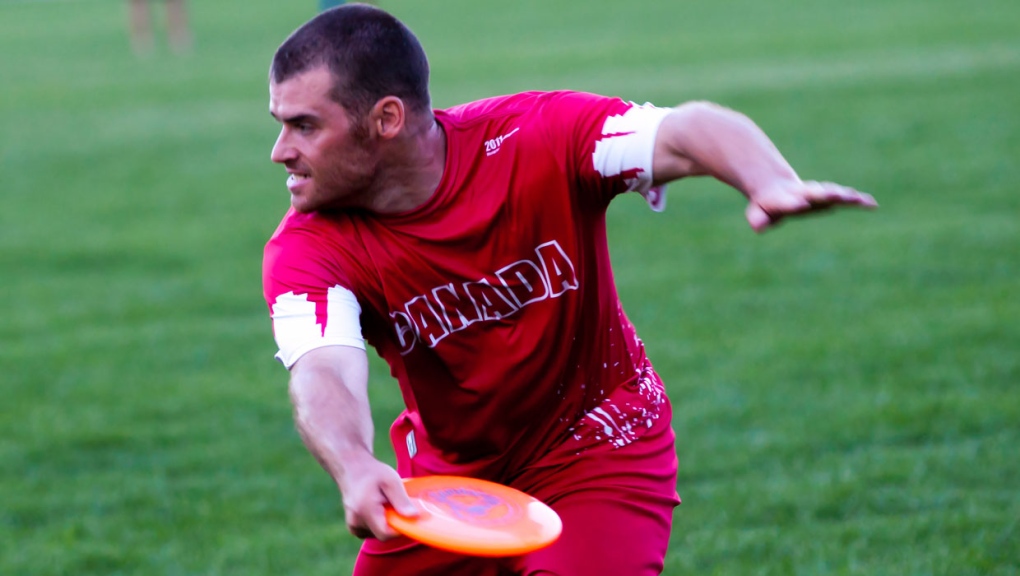 Rob McLeod will be attempting a long distance throw to his dog Sailor at McMahon Stadium for the Calgary Stampeders halftime show. (Supplied/Rick Lebeau Photography)
CALGARY -

An Alberta-born and Maritime-raised athlete will be attempting a special feat this weekend at the Calgary Stampeders game with the help of his four-legged friend.

‘Frisbee’ Rob McLeod, who was born in Edmonton but moved to New Brunswick as a child, took up the sport of Frisbee when he graduated high school and has been playing it ever since.

He's been an expert too – setting his first Guinness World Record for distance in 2011 with the help of his dog Davy Whippet.

Since then, McLeod's set more records and currently holds six. On top of that, he's won multiple world championships and titles in dog competitions.

On Saturday, he'll be attempting a long-distance throw, launching a Frisbee from one endzone to the other at McMahon Stadium.

McLeod's current canine teammate Sailor, who is related to Davy Whippet, will attempt to catch it.

"This would be the first time it's ever been done at a live sporting event, although it's been attempted many times," McLeod said. "What makes this even more challenging is that all the other attempts have been on NFL fields, which is 10 yards shorter than a CFL field."

Sailor, a Border Collie-Whippet mix, isn't as fast as a purebred Whippet, McLeod says, but he has "more drive."

"He'll go harder more often and longer. He's not as sensitive to the conditions so it's really good that way. But then he's also a huge couch potato and sleeps all the time and (he's) just a nice apartment dog and pet."

One of the biggest unknown factors when it comes to Sailor is how he'll react to the noise and excitement of the halftime show.

"When he catches it, they're going to have fire go off and who knows what. I think he'll be fine but I'm just excited for the energy."

The event will be the largest performance he's taken part in since the COVID-19 pandemic hit. During that time, McLeod has performed virtually and at smaller events.

"That's what I'm excited about too – it's not just me doing it online, it's being with people and we're in that moment together.

"This will be the largest crowd I've ever done a demo in front of."

While it's a large part of what he does, there’s more than throwing Frisbees in McLeod’s arsenal. He's also a motivational speaker, teaching children life lessons along with some pointers on throwing.

"Messages are about physical literacy – I tell them that I didn't actually get into Frisbee until after high school. You don't have to start something really young to be good at it. Being in Calgary we know that a lot of Olympians didn't start in their sport until they were in their 20s."

He also speaks about being kind to others and resiliency.

"If you want to do something, you focus on doing it instead of missing it. I use those messages and get them playing Frisbee so they get to reinforce those messages."

McLeod's biggest challenge for the attempt will be Calgary's weather, which is currently expected to be rainy.

"I actually have a slogan, 'let the wind guide you.' So, I can do all the preparation possible and be ready to go and show up and there's no wind. Or I show up and it's bad wind. You can't really do much," he said.

"I've been doing a lot of throwing this week just to get my timing down. To throw that far, it's just like shotput or discus – it's about timing."

Sailor will need to be ready too and McLeod says he'll do whatever he can to make sure he's comfortable and safe.

"I'll bring some towels with me and I'll probably have to wrap his legs up so he doesn't hurt himself on the turf. Maybe 110 yards won't be possible but I know it'll be a great show regardless."

Tickets for the game, between the Calgary Stampeders and the Saskatchewan Roughriders, are available to purchase online.

Five dollars from each ticket purchased through the Frisbee Rob Ticket Promo will be donated to the Bob Freeze Sports Grant, a fund that helps youth experience sports for themselves without being restrained by costs.