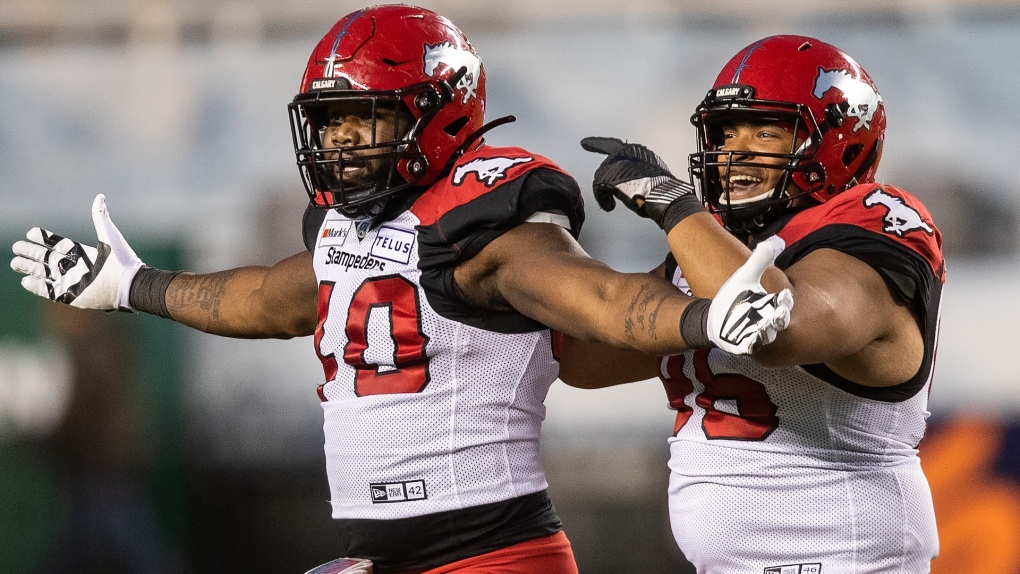 The Calgary Stampeders want to build momentum and start climbing out of the CFL's West Division basement in Hamilton on Friday.

The Stampeders (2-4) are coming off a 32-16 win over the Edmonton Elks in the CFL's Battle of Alberta.

Calgary quarterback Bo Levi Mitchell, who returned to the lineup after missing three weeks with a broken leg, went 23-for-42 in passing for 276 yards and a touchdown throw to Kamar Jorden. Mitchell threw one interception.

Stringing together back-to-back wins for the first time this season would give the Stampeders confidence heading into a bye week.

"I'd like to play with a lead. That would be nice," head coach Dave Dickenson said.

"We're still in a situation where we have to keep climbing. We know where we're at. We know where this team is and we know we are getting better, but we also know there is a big challenge in front of us."

Calgary will be minus linebacker Cory Greenwood, who is out with a neck injury.

The Stampeder defence will line up against an inexperienced Tiger-Cats quarterback in Hamilton (2-3).

David Watford will start for the first time in his CFL career.

Dane Evans is on the six-game injured list with an abdominal-muscle injury sustained in the fourth quarter of a 17-16 loss to the Toronto Argonauts last week.

Watford took the majority of first-team reps during Wednesday's practice.

Jeremiah Masoli, who injured his ribs in Week 2, practised this week and returns as backup to Watford on Friday.

"After all the information that we got and talking with the therapy staff, seeing how Jeremiah was feeling, this is the way that we've decided to start," Hamilton head coach Orlondo Steinauer said.

"David will go out there for us. Jeremiah is definitely available to play and we'll go from there."

Watford has completed just six passes for 78 yards this season. Drawing in as starter is yet another change at a position plagued by injuries and sub-par performance in Hamilton.

Masoli opened the season as the No. 1 pivot, but he was replaced by Evans following the team's 19-6 loss to the Winnipeg Blue Bombers in the opener.

Masoli, 33, threw four interceptions in limited action this season. He's 41-for-66 in passing for 371 yards and a touchdown.

Watford, 28, has thrown 50 passes for 320 yards in three CFL seasons. He scored six rushing touchdowns for the Tiger-Cats in short-yardage situations in 2019.

"We don't put anybody out there that we don't think we can win with," Steinauer said.

Hamilton receiver Brandon Banks will sit out a second straight game, the coach said. The CFL's Most Outstanding Player in 2019 is out with a rib injury.

"We have a short turnaround this week. It's best for Brandon and for our football team right now," Steinauer said. "No long-term concerns with Brandon."

The Ticats are in Ottawa next Wednesday to face the host Redblacks.

This report by The Canadian Press was first published Sept. 16, 2021.

The gang that kidnapped a group of 17 American and Canadian missionaries in Haiti has asked for US$1 million each for their release, a top Haitian official told CNN Tuesday. The 16 American citizens and one Canadian were kidnapped by the powerful '400 Mawozo' gang on Saturday.

'I'm heartbroken by this': Celine Dion delays opening of Las Vegas shows due to medical reasons

Just weeks before Céline Dion was set to return to the stage in Las Vegas, the Quebec superstar is delaying her show due to "unforeseen medical symptoms," her team said in a news release.