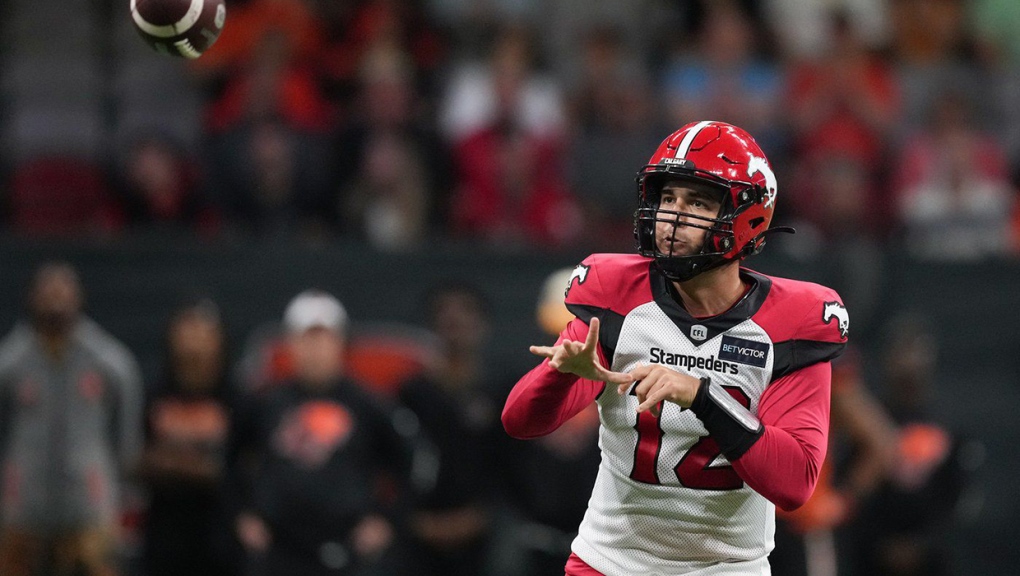 Calgary Stampeders quarterback Jake Maier passes during the first half of CFL football game against the B.C. Lions in Vancouver, on Sept. 24. (THE CANADIAN PRESS/Darryl Dyck)
CALGARY -

The Calgary Stampeders signed American quarterback Jake Maier to a contract extension through the 2024 season Tuesday.

Maier began the year as the backup to veteran Bo Levi Mitchell but became Calgary's starter before its 31-29 loss to the Winnipeg Blue Bombers on Aug. 25. He has guided the Stampeders (9-5) to victory in three of his five starts heading into the club's home game Saturday night against the Toronto Argonauts (8-5).

"Jake's play has been very consistent and, for a young quarterback, he's been very efficient," Stampeders president/GM John Hufnagel said in a statement. "Like any young player, he still has room for more improvement but we believe he has a very bright future.

"It was important for the organization to get this extension done before the end of the season and we're pleased that Jake has made this commitment to the team. In regards to Bo Levi Mitchell, we plan to speak to him at the conclusion of the season and we’re keeping all options open. Bo has been a tremendous player for the Stampeders for a long time and he has continued to be a great teammate and a great leader."

Mitchell, 32, joined the Stampeders in 2012 and has spent his entire CFL career with the franchise. He's in the final year of his contract with Calgary.

On Tuesday, Maier was named the CFL's second top performer of the week after guiding Calgary to a 25-11 win over the B.C. Lions. Maier completed 27-of-33 passes for 294 yards while rushing twice for 14 yards.

Maier, 25, is in his second season with Calgary, having completed 136-of-178 passes for 1,653 yards with nine TDs and two interceptions this year. The six-foot, 212-pound Maier has appeared in 25 career CFL regular-season games and amassed 2,864 passing yards with 14 touchdown and five interceptions.

"I thank the Stampeders for the opportunity to continue my career in Calgary," said Maier. "I am very excited for the future of this franchise and promise to do everything we can to deliver more championships to this great city."

Maier has also rushed 22 times for 70 yards and two TDs.