CALGARY — Richard Babuik is urging Calgary renters to know their rights after he was given a 14-day notice to move out of his southwest apartment for withholding rent.

Ordered to be out by Nov. 26, Babuik said he didn’t pay the rent because his suite wasn’t repaired properly after it flooded numerous times.

“This has been incredibly frustrating,” said Babuik.

Babuik said the suite he rented through Boardwalk flooded four times in 16 months, the first in June 2018.

“You assume it was a one-time occurrence so I went with the flow,” he said. “It took a long time to remediate, they did the cosmetic fixes, but I let it go.”

Babuik admits he was facing a financial hardship and struggled to pay rent on time, but says he deliberately stopped paying after the third flood in September.

“I was very upset about the condition of the apartment and so I didn’t pay September’s rent when it was due,” said Babuik.

The apartment flooded for a fourth time on Oct. 18.

“That’s when I noticed certain areas of the floor were squishy again and I could see moisture coming up,” said Babuik.

He contacted his leasing office, along with Alberta Health Services. 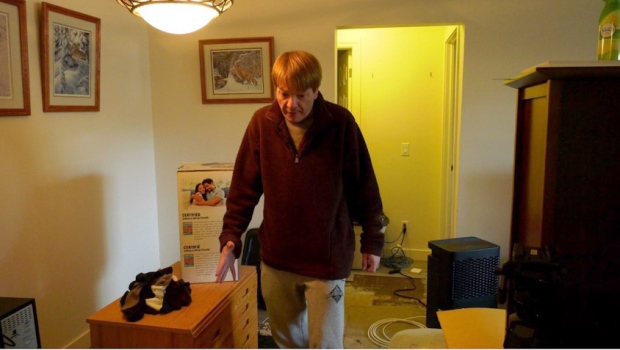 Richard Babuik says he's not sure where he'll go after being evicted for withholding rent.

“There was evidence of asbestos-containing materials in the tiles underneath the laminate flooring,” reads an inspection report. “All floor coverings are not maintained in good repair, free of cracks, holes, loose or lifting coverings and in a condition that renders it easy to clean.”

“The reason for Mr. Babuik eviction is personal and private. I can confirm the reason for eviction was not a result of the flooding issues that he brought forward,” said Christopher.

“On September 2019, we excavated outside the affected suite and installed a membrane. For the situation that began on October 2019, last month, we removed a portion of the laminate floor, removed small sections of drywall in the bedroom, and installed a dehumidifier in the suite to help with drying the suite … We were unable to complete the extensive repairs needed while Mr. Babuik resided in the suite.”

According to Boardwalk, depending on the extent of seepage or flooding, residents may be required to move to another suite.

“Mr. Babuik was offered another suite to reside in while the work was to be completed during the most recent issue,” said Christopher.

“Mr. Babuik declined to sign a waiver for his belongings to be moved to another suite. When he decided to agree to signing the waiver, legal action had been already initiated so we declined this option.”

Christopher said the company was notified by AHS that tiles in the bedroom were damaged so Babuik was moved to a hotel on Nov. 18, until the end of his tenancy.

Lawyers who work with lower income Calgarians say renters should get basic legal information and be informed what laws apply to them.

“If they aren’t able to reach an agreement or if they’re unsure whether or not they’ve reached an understanding, then they should consult with a lawyer,” said Gabriel Chen, senior counsel, litigation services with Calgary Legal Guidance, which assists people who can’t afford lawyers.

“There are a lot of free legal information advice services available throughout Calgary.

“Tenants should never withhold rent unless they have received legal authorization from a judge or the Residential Tenancy Dispute Resolution Service or an authority like that because otherwise they put themselves at risk of having their lease terminated and if they don't have another place to go, that puts them at significant risk of being homeless.”

Chen said renters have the ability to contact the RTDRS, AHS or the city, but said the difficulty is the organizations work independently.

Babuik said he was naive and expected a large rental company like Boardwalk would handle complaints differently.

“I basically just hoped they would fix it all,” he said.

Babuik said he doesn’t have anywhere to go and doesn’t know where he will live now. He’s thankful to those who answered an online ad to help him move his belongings and those who offered storage space.

“At least the things that are dear to me are not going to be garbaged,” said Babuik.