Calgary will soon be home to the world's tallest mural

Calgary will soon be home to the world's tallest mural

A German graffiti artist is in Calgary attempting to create the world's tallest mural.

Mirko Reisser, known as DAIM, is using a swing-stage to paint and spray-paint a tremendously tall piece of art on the eastern side of the First on Tenth building downtown, located at 123 Tenth Avenue S.W.

Reisser, whose career began on the streets of Hamburg, Germany in the 1980s, says he started creating the project in his sketchbook before transitioning to his computer to finish crafting.

"It took me, I think, seven days just to put the sketch on the wall," he said. "It's not only very tall, it's also very big."

Reisser, who is visiting Calgary for the first time to complete the project, says it's also his first time working on a swing stage.

"It's very high, so it's definitely a challenge."

To help him, Reisser has three assistants from Calgary

Reisser says he already completed the world's tallest graffiti project 27 years ago, but it was only 28- metres tall.

"So this is like three times higher," he said.

It's anticipated the towering art project will be completed by the end of the month.

It could potentially have been finished sooner, but the rain and wind have made for a less-than-ideal environment for Reisser to paint in.

"If it's too windy the spray-paint flies all over," he complained.

The gargantuan undertaking is a part of the Beltline Urban Murals Project (BUMP), a community-led and artist-focussed festival that sees public spaces reimagined through art. 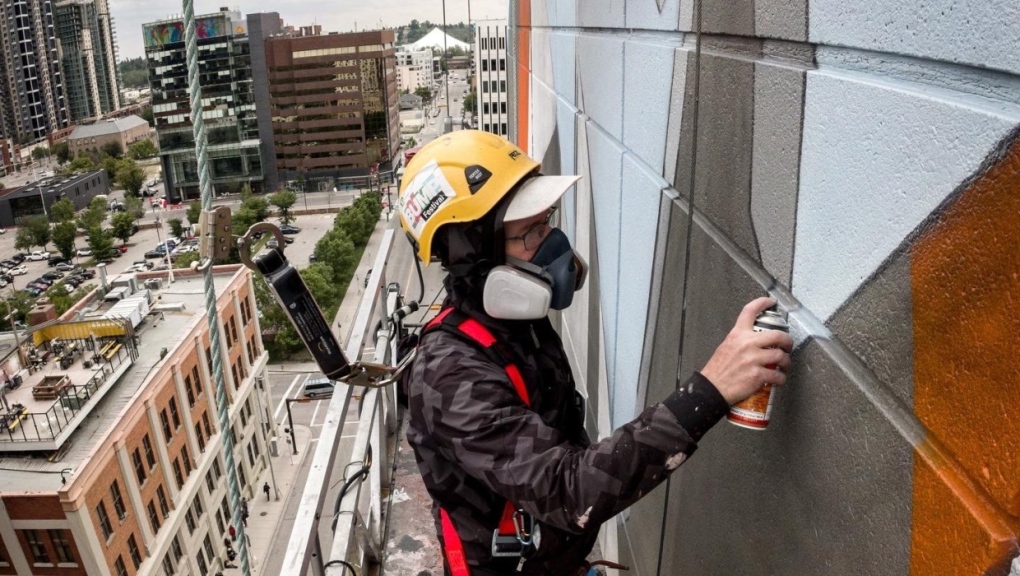