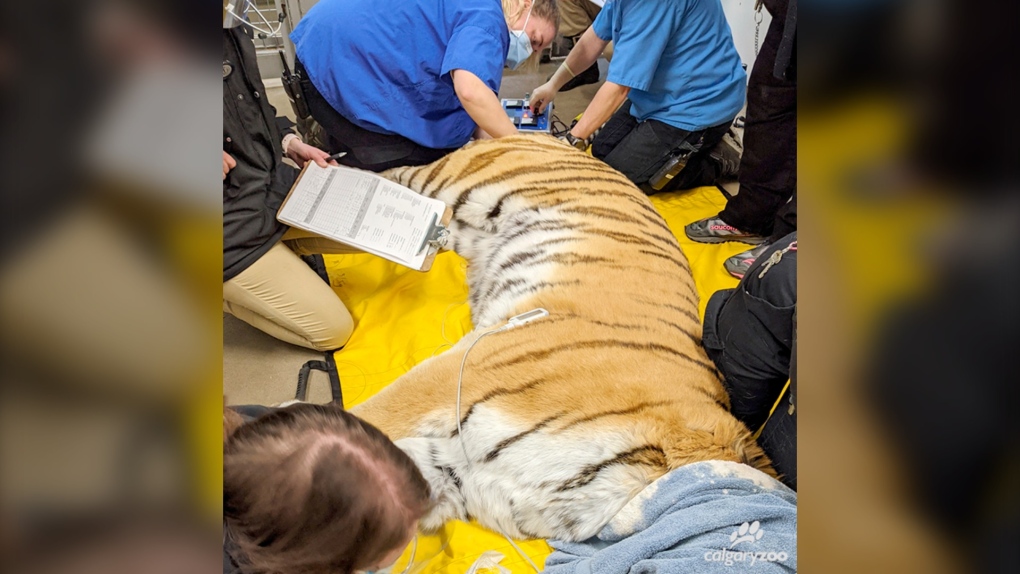 CALGARY -- Animal caregivers at the Calgary Zoo are eagerly waiting to see whether an artificial insemination procedure using Amur tigers Youri and Sarma was successful.

The move is part of an international effort to save wild Amur tigers from extinction.

“Everything we do at the Calgary Zoo is with a focus to support wildlife conservation,” said Jamie Dorgan, director of animal care and health.

“Sarma and Youri are genetically significant animals within the global Amur tiger population. Supporting them to successfully produce offspring is critical for the international efforts to save wild Amur tigers from extinction.”

Now nine years old, Sarma came to the Calgary Zoo in August 2017 from the Cherrybrook Zoo in New Brunswick.  Now seven-years-old, Youri came to Calgary in June 2018 from the Granby Zoo in Quebec.

The animals are a recommended breeding pair by the Association of Zoos and Aquariums’ Species Survival Plan (SSP), but haven’t successfully bred since they have been together.

"The Association of Zoos and Aquariums’ Amur tiger Species Survival Plan (SSP) contributes to the success of an assurance population of animal ambassadors in human care that advocate for their wild relatives, and inspire people to support important conservation efforts," the zoo said in a statement.

"Some SSPs already contribute to bolstering numbers or genetics of wild populations, and many more could in the future.

Female tigers are induced-ovulators, which means the act of mating is what normally causes the egg to be released for fertilization.

"Breakthroughs in reproductive science have shown that with the use of hormone therapy to induce ovulation and assisted reproductive techniques, artificial insemination has a higher margin of success than it used to," read a statement.

Sarma was given oral hormone therapy for a month leading up to the procedure to adjust her reproductive cycle and she received a series of shots in the days before her procedure to stimulate her to ovulate.

Animal care team members harvested sperm from Youri last week and while he was recovering, Sarma was inseminated

Both Amur tigers recovered from their anesthesia.

Caregivers also collected baseline fecal samples that will help confirm whether or not Sarma is pregnant in the coming weeks.

"In addition to comparing her baseline hormone levels in fecal samples to new fecal samples collected over the 12 weeks, they’ll monitor for physical changes such as weight gain and mammary changes, and for behaviors such as nesting," the zoo said.

"If the procedure was successful, the fertilized eggs will now have implanted in her uterus, where cubs will develop over a three-and-a-half-month gestation period."

Amur tigers — previously known as Siberian tigers — are classified as endangered by the IUCN Red List with an estimated 540 individuals left in the wild.

The species is mainly threatened by habitat loss due to agriculture, logging and mining. They are also illegally poached for the wildlife pet trade and for their fur and body parts.