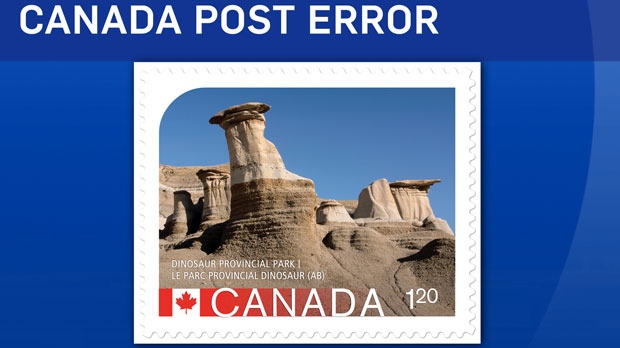 Canada Post is recalling all stamps commemorating Dinosaur Provincial Park, issued to post offices last week, because the hoodoos on the stamp don't exist there but are actually from east of Drumheller, Alberta.

Officials at Canada Post have issued a recall on a stamp featuring Dinosaur Provincial Park, a UNESCO World Heritage Site, because of a big problem.

The error comes from the image used on the stamp, which is of a set of hoodoos, a rock formation found in the provincial park, located just north of Brooks, Alberta.

The problem is that the image on the stamp is actually of hoodoos that exist east of Drumheller, a community about an hour and a half northwest of Brooks.

Canada Post has apologized for the error and is recalling the stamps from all post offices so they can be destroyed.

A new stamp, with a correct picture, will be released at a later date.