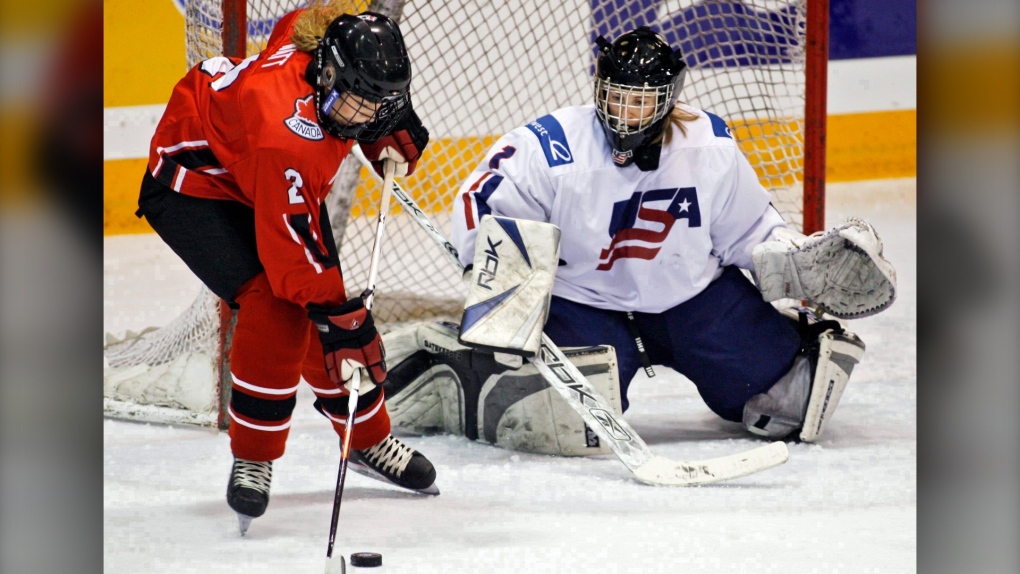 After a cancellation and a delay, Canada's top young female hockey talent starts preparing to finally step on the world stage.

A selection camp of 40 players opened Tuesday in Calgary to choose the Canadian team for the 2022 women's under-18 team championship June 6-13 in Madison and Middleton, Wis.

The tournament was relocated from Linkoping and Mjolby, Sweden, and rescheduled from January when it was called off because of the COVID-19 pandemic.

When the International Ice Hockey Federation announced the cancellation of the 2022 women's tournament again two weeks out from the Jan. 8 puck drop, and on the eve of the men's under-20 championship back in Edmonton — which only lasted four days because of outbreaks — dismay in the women's hockey world grew louder on social media.

Hockey Canada announced Jan. 20 the 23 under-18 players who would have worn the Maple Leaf in Sweden.

"We made a selection before the world championship got cancelled and in honour of these kids, because we still didn't know in January we were going to have a world championship. We felt it was important for them to get recognized they were named to the team," Hockey Canada director of operations Gina Kingsbury said Monday.

"The way it was communicated to them is if we do get to have a world championship, and we're able to have a selection camp, it's the right thing to do for everyone involved, to do it the right way."

With the 2022 tournament rescheduled to late spring in the United States, 24 forwards, a dozen defenders and four goalies were invited to selection camp vying to play in the first women's world under-18 championship in more than two years.

"It's really big for women's hockey because I can't imagine two years in a row of no competition at all in this age group," Kingsbury said.

"In general, there's way more repercussions than just that. There's college, everything. These kids have been impacted nationally but also locally as well. They haven't had their normal seasons. There were a lot of restrictions and things they had to adapt to."

All those named to the initial squad in January were invited to selection camp.

Two-thirds of Canada's Olympic team that claimed gold in Beijing are alumni of a world under-18 championship, including captain Marie Philip-Poulin and Natalie Spooner who played in the first tournament in 2008 in Calgary.

"I did a quick average age of our athletes, how long did it take them to go to their first Olympic Games from their first U18 world championship and it was 6.8 years," Kingsbury said. "2030 is their realistic time frame for them to be at that level.

"They need that international experience. Now they get a chance to see where they stand with the best in our country and be able to play at that level and raise their game to that level and pace. It's critical experience for them."

The under-18 women's pandemic pain followed a path similar to that of their senior counterparts whose 2020 and 2021 women's world hockey championship in Nova Scotia were both cancelled.

The 2021 tournament was eventually rescheduled and played last August in Calgary.

There were women born in 2003 who didn't get to play in a world under-18 world championship because they aged out during the pandemic.

Canada's second under-18 roster this year will be named following intrasquad games Friday and Saturday at WinSport's Markin MacPhail Centre.

Canada, Finland, Sweden and the U.S. comprise Group A in Wisconsin, with Czechia, Germany, Slovakia and Switzerland in Group B.

The Canadians open June 6 against the Finns, followed by the Swedes on June 7 and the U.S. on June 9.

University of Alberta Pandas head coach Howie Draper returns to the under-18 bench after navigating Canada to gold in 2019 and silver in 2020.

Winnipeg's Gord Draper, who was also on the staff of those teams, returns as goaltending coach.

Canadian women's under-18 teams have won five gold, seven silver and one bronze in the history of the tournament.