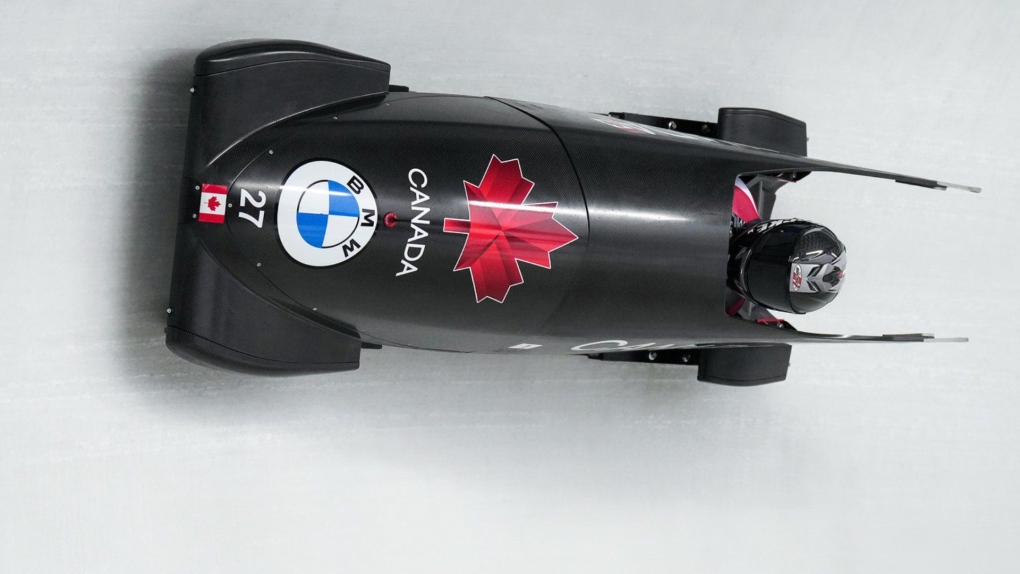 Canada's Bianca Ribi races down the track during the women's monobob competition at the IBSF bobsleigh world cup event in Whistler on Nov. 25, 2022. THE CANADIAN PRESS/Darryl Dyck
WHISTLER -

Canada's Bianca Ribi was stunned as she stood at the bottom of the bobsled track Friday.

In her first World Cup appearance as a pilot, the 26-year-old from Winnipeg captured gold in monobob.

Ribi came into the race with an edge over her competitors, thanks to ample training on the Whistler Sliding Centre's fast and challenging track. She was the first athlete down Friday morning and set the tone for the day.

"I think I was just super locked in and focused on my run," she said. "I knew that I knew (the track) better than the majority of the field and at the end of the day, it was just I needed to have a good push, I knew that I needed to execute.

"But I definitely didn't think it was going to land me in first place."

Ribi finished the two-heat race with a time of one minute 50.89 seconds. Toronto's Cynthia Appiah was 0.27 seconds behind and finished second, and American Kallie Humphries took bronze.

Humphries, a four-time Olympic medallist, spent more than a decade competing for Canada before switching to the U.S. in 2019.

"One of the unfortunate side effects of being in a sport like bobsled is that even though you are Team Canada, you are still competing against each other," she said. "But it pushes you more.

"You're going to be competing against the whole world but to compete against your teammate is just a little extra oomph.”

The last several months have been difficult for Canada's bobsled and skeleton teams.

More than 70 current and former athletes began calling for change within Bobsleigh Canada Skeleton last March, citing what they called a toxic environment of maltreatment within the organization.

The team was dealt another blow earlier this month when veteran Christine de Bruin, who won Olympic bronze in Beijing in February, was handed a three-year suspension for a doping violation.

"I know that we've had a lot of issues over the summer and over the (last four years)," she said. "But it shows that the women's program is still strong and will continue to build up from here."

Ribi's first-place finish Friday was threatened by Germany's Laura Nolte, who edged the Canadian by 0.01 seconds in the first heat and appeared to be besting her again in the second when she crashed. Her bright-yellow sled flipped after going up high on a wall late in a turn, sending her skidding down the rest of the track.

Nolte's teammate, Lisa Buckwitz, also crashed in the second heat of the day.

Monobob, where an athlete races solo in their bobsled, is new to the World Cup circuit this season after making its Olympic debut at the Beijing Games earlier this year.

Taylor Austin and Shaquille Murray-Lawrence were the top Canadians on the men's side Friday, coming sixth in the two-man bobsled.

The duo finished 0.80 seconds back of German gold medallists Francesco Friedrich and Alexander Schueller, who clocked a time of 1:42.22.

The result is one the emerging Canadians can build on, said Murray-Lawrence, a brakeman who made his World Cup debut on Friday.

"I think it gives us a tremendous boost," said the former CFL running back. "I think, especially on your home ice, it's always good to lay down some good times and it will carry you through the World Cup season."

The men's field saw a pair of dust ups, too, with Americans Frank del Duca and Hakeem Abdul-Saboor flipping their sled on to its side in the first heat, and Swiss sliders Cedric Follador and Nicola Mariani crashing near the bottom of the track during their second run.

"If you don't have that absolute confidence in yourself, this track will bite you real quick," Austin said. "I'm not saying they didn't have it, but you have to be at your absolute best with this track."

The first bobsled World Cup competition of the season continues Saturday with the two-woman and four-man bobsled events.

A powerful 7.8 magnitude earthquake rocked wide swaths of Turkiye and neighbouring Syria on Monday, killing more than 2,600 people and injuring thousands more as it toppled thousands of buildings and trapped residents under mounds of rubble.

As preparations are underway for the anticipated health-care 'working meeting' between Prime Minister Justin Trudeau and Canada's premiers on Tuesday, new details are emerging about how provinces anticipate the talks will unfold.

Two pilots walked away safe after a large air tanker owned by a Vancouver Island company crashed while battling wildfires in western Australia.

Google says Canadian employees affected by recently announced job cuts are being told today whether they have been laid off.

February's full snow moon, which first appeared this weekend, will light up the sky over the next two nights, with the spectacle already reaching full illumination on Sunday morning. But this year's full moon was smaller than those of recent years.