Canadian Natural out $143M because of Keystone XL charge, raises dividend 11 per cent 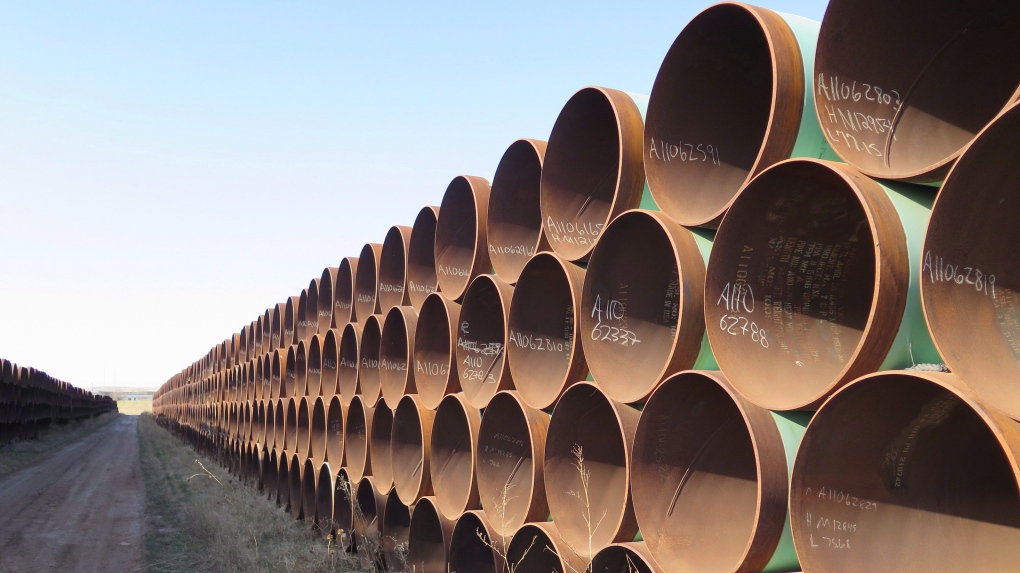 Hundreds of kilometres of pipes stacked for the Keystone XL pipeline, in Gascoyne, ND., on April 22, 2015. (Alex Panetta / THE CANADIAN PRESS)

CALGARY -- The move by U.S. President Joe Biden to cancel the Keystone XL pipeline in January continues to plague Canadian oil companies, with Canadian Natural Resources Ltd. forced to digest a related $143-million charge on its fourth-quarter results on Thursday.

If not for the blemish on its earnings in the last three months of 2020, analysts said the company would have registered a solid beat on expectations driven by strong oilsands mining production and operating cost cuts.

“In 2020, we were nimble, quickly lowering our capital,” said president Tim McKay said on a conference call, referring to Canadian Natural's move to cut its 2020 budget to $2.68 billion last May from its original $4.05 billion in view of plunging oil prices.

“With our long-life, low-decline and high-quality asset base, we still achieved record annual corporate boe (barrels of oil equivalent) production of 1.16 million boe per day, or an approximately 65,000 boe/d increase over 2019 levels.”

McKay said the company's production of synthetic crude from its oilsands mining and upgrading operations reached a record of 490,800 barrels per day in December due to high utilization rates and ongoing incremental production growth projects.

Pipeline builder TC Energy has warned it expects to take a “substantive” charge on the Keystone XL pipeline project when it reports first-quarter results.

The Canadian Natural charge is related to a cash hit the company anticipates because of the contract it signed to ship 200,000 bpd on the proposed 830,000-bpd pipeline, chief financial officer Mark Stainthorpe said in an interview.

Canadian Natural reiterated its 2021 capital budget of about $3.2 billion, which is expected to add about 61,000 boe/d of production over 2020 levels.

On the call, McKay said he's confident that export capacity into the United States will continue to improve with Enbridge Inc.'s Line 3 replacement pipeline project starting up late this year and the Trans Mountain pipeline expansion set to be in service by the end of 2022.

Canadian Natural says it has 94,000 bpd of committed capacity on the latter.

The company announced it is increasing its quarterly dividend for the 21st consecutive year by 11 per cent to 47 cents per share after resisting calls last year to lower it as oil prices fell. It also plans to buy back shares this year as a way to provide returns to shareholders.

Any other excess cash will be applied to debt repayment, McKay said, adding he would “never say never” in response to a question about more acquisitions following the $111-million buyout of Painted Pony Energy Ltd. which closed in October.

In reports, analysts said Canadian Natural matched their expectations with production of 1.2 million barrels of oil equivalent per day in the quarter, up from 1.16 million boe/d in the fourth quarter of 2019.

“Of note, excluding a provision for the cancellation of Keystone XL (something other companies also recorded), cash flow per share would have been a nice beat,” pointed out analyst Phil Skolnick of Eight Capital in a report to shareholders.

National Bank analyst Travis Wood said the company is well-funded for its 2021 programs.

“With an abundance of free cash flow, Canadian Natural has significant optionality for free cash flow allocation across debt reduction, returns to shareholders, organic growth, and opportunistic acquisitions,” he said in a report.