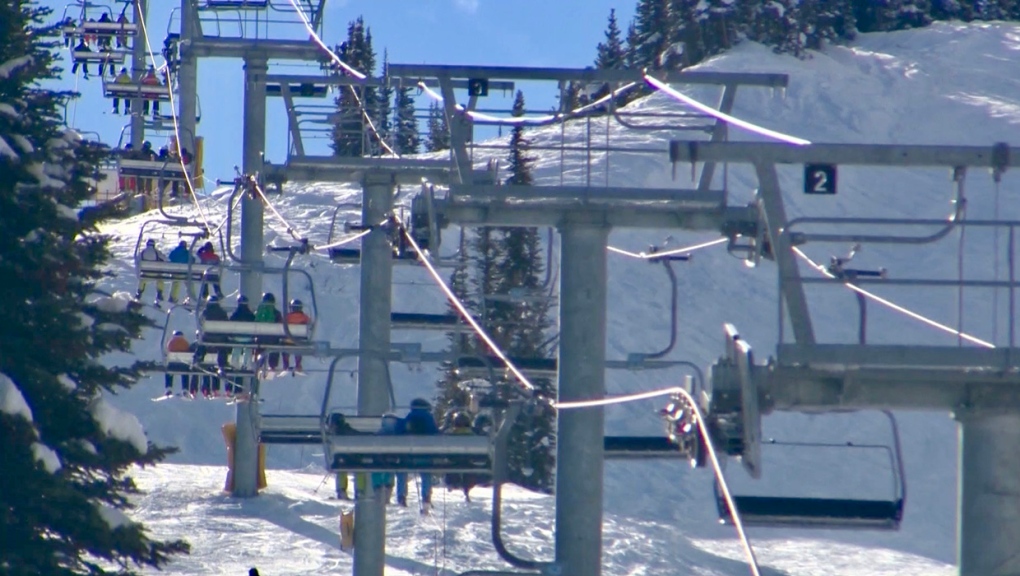 Health experts are worried that ski resorts in Alberta and B.C., such as Sunshine Village in Banff, have few rules in place to limit the number of people on hills. (File)

CALGARY -- Canadian ski resort operators planning for a season that begins in about two months are being forced to balance profits with protecting the health of their guests in view of a COVID-19 pandemic that shows few signs of ending.

Although medical experts agree there's little chance of infection while flying through the powder on a steep double-black-diamond ski run, they say the risk increases dramatically when riding a packed gondola to the top of the hill or enjoying an apres ski cocktail in a jammed resort bar.

Resorts say skiers and snowboarders will have to wear masks on lifts and gondolas and when indoors and social distancing will be encouraged by removing tables and chairs in bars and restaurants. They are vowing more frequent cleaning and sanitizing.

“The ski hills have a responsibility to control the number of people that are on the hill and that number cannot be as high as it was pre-COVID,” he warned.

Gondola loading is particularly tricky for Sunshine Village ski resort in Banff National Park, where the only way for guests to get from the parking lot to the main ski area is by taking a 17-minute ride in an eight-person gondola car.

“As the gondola is our main lifeline, when it is busy we will be loading it to capacity,” said spokeswoman Kendra Scurfield in an interview.

“We tried limiting capacity in the spring prior to being closed for COVID and we found the lineup was more of a hazard. People weren't social distancing in line, it backed onto to the road, it just became more dangerous than loading people up.”

Sunshine also won't limit overall skier numbers, she said, but aims to reduce crowding by offering an afternoons-only season pass for the first time this year to encourage people to arrive later in the day. It's also erecting two large tents and opening a little used building to allow guests to warm up without entering its common areas.

At Kicking Horse Mountain Resort in Golden, B.C., hiking, biking and sightseeing guests were able to load the eight-man gondola from the base lodge to the top of the mountain at capacity during the summer if they had appropriate face masks, said Matt Mosteller, spokesman for Resorts of the Canadian Rockies.

It hasn't been decided if that will also be allowed this winter, he said, adding that operator Resorts of the Canadian Rockies is still working on the fine details of COVID-19 rules for its six resorts in B.C., Alberta and Quebec.

Plans could change, he said, but the company so far is not intending to restrict the overall number of skiers at its resorts.

Meanwhile, at destination resort Whistler Blackcomb, 120 kilometres north of Vancouver, no formal limits have been placed on the number of guests allowed on the hill but the expectation is that numbers - which can reach 35,000 people on busy days - will be 10 to 20 per cent lower, said spokesman Marc Riddell.

Passholders will be given preference to reserve a lift ticket and daily tickets will be available online only if there's sufficient capacity. Staff will restrict the number of guests on lifts and gondolas so that unrelated parties have sufficient social distancing, Riddell said.

The lockdowns last March eliminated as much as 25 per cent of the season for some mountain resorts, said Christopher Nicolson, CEO of the Canada West Ski Areas Association, which represents 92 ski hills west of the Manitoba-Ontario border.

Limits on international travel pose a major challenge because 10 to 30 per cent of skiing guests are from outside of Canada, he said. On the other hand, Canadians will find it harder to travel outside the country this winter, so that could result in more domestic ski visits.

Canadians are able to take lessons from the mixed 2020 ski season in Australia which is just wrapping up now.

In an email, Colin Hackworth, CEO of the Australian Ski Areas Association, said the ski industry in that country went into the season in June vowing to present a simplified and comprehensive COVID-19 operating plan.

“In Australia, the resorts worked to a 50-per-cent-of-normal capacity constraint, and limited capacity by way of selling/distributing online passes only,” he said.

There were setbacks, Hackworth said, including COVID-19 outbreaks that resulted in bans on travel from Melbourne to ski resorts in Victoria state and resulting in the closure of two ski resorts after only a few days.

He added the 2020 season was “probably the worst Australian snow season on record,” which meant some resorts were forced to close earlier than usual.

Dr. Freedman said he thinks it will be difficult for Canadian ski hills to maintain proper cleansing and social distancing this year and he's not happy about plans to pack eight people in a gondola.

But he knows of at least one skier who will be hitting the slopes anyway.

“I'm an avid skier, I intend to be skiing this winter. But I also intend to do it wisely and to use precautions.”

This report by The Canadian Press was first published September 28, 2020.