Canadians cut back on groceries, while stores deal with the leftovers

Canadians cut back on groceries, while stores deal with the leftovers

Once a week, Becky Yeh makes dinner for her son.

The rest of the time, the Calgary senior is cooking for one.

"I cook only for myself so the choice is not much," she said as she loaded groceries into her car outside the Centre Street Safeway.

"Lunchtime is a salad and then at night it's only a small portion of fish and bowl of vegetables. I usually make fresh vegetables like broccoli, cabbage and cauliflower."

But like many other Canadians, Yeh is noticing how much more those vegetables cost.

In fact, pretty much all groceries are going up and people are struggling to cover that bill.

A new Nanos research poll says 61 per cent of Canadians are buying cheaper food, 25 per cent are stockpiling when they find deals and 17 per cent are simply eating less.

The survey asked more than 1,000 Canadians if their household had used a cost-saving option in the past month in response to the price of food.

"People don't have a lot of discretionary income," said Simon Somogyi, an expert in food business and retail at the University of Guelph. "They are trying to survive when everything is increasing so rapidly around them – prices increased by 11 per cent in the past 12 months."

That's also raising concerns about the potential for more waste.

Fresh food won't wait for people who can't afford it, meaning more may be thrown out at the store.

For the last year, staff at Calgary Co-op have spent every morning pulling all the food hitting its best-before date off the shelves.

It's then donated to local food banks, which are also seeing a growing demand.

"It's not only produce – it's also deli, frozen foods, dairy, meat, you name it," said Sage Pullen-Macintosh with Co-op.

"We are able to provide a lot of product – we just hit over a million pounds of food given to the food bank since we launched the program." 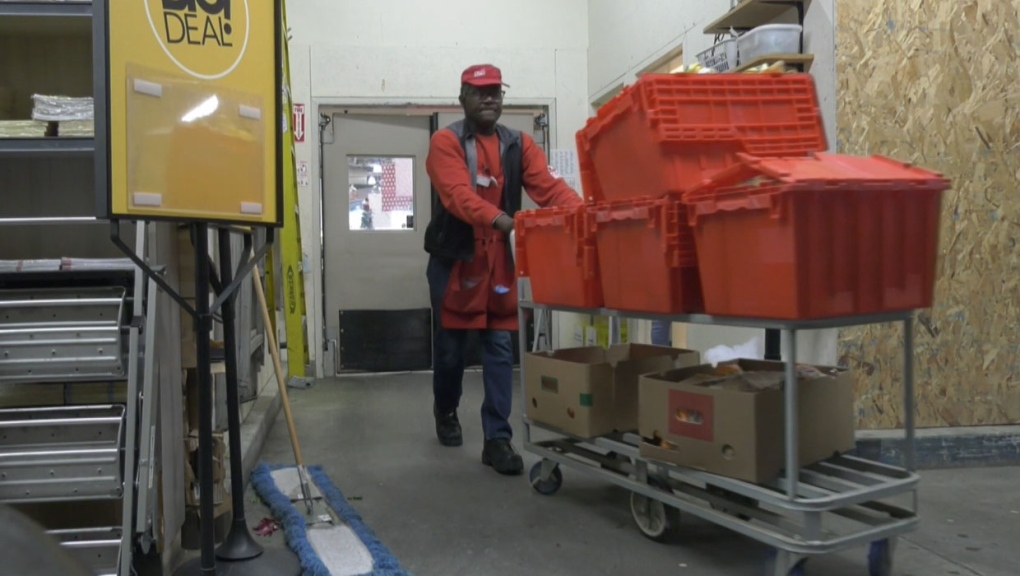 Sobeys/Safeway and Loblaws both have similar food surplus donation programs and other groups are also redirecting soon-to-expire produce.

Spud.ca users can buy the food at a deep discount while Loop Resource directs unsold food to local farms to feed animals.

In the meantime, Yeh says she found a way around paying more – she's eating less.

"When you get older, your appetite is not so big," she said. "I'm too old right now – I'm only eating small portions anyway."

Nanos conducted an RDD dual frame (land- and cell-lines) hybrid telephone and online random survey of 1,084 Canadians, 18 years of age or older, between Oct. 30 and Nov. 4 as part of an omnibus survey. Participants were randomly recruited by telephone using live agents and administered a survey online. The sample included both land- and cell-lines across Canada. The results were statistically checked and weighted by age and gender using the latest Census information and the sample is geographically stratified to be representative of Canada.

This study was commissioned by CTV News and the research was conducted by Nanos Research.

Numbers may not add up to 100 due to rounding.