CALGARY -- A group of pay-it-forward Canmore minor hockey players are looking for a few good people to help them help others.

That's because there's still time to vote for the U13 Canmore Eagles, one of 11 teams that have made it into the regional finals of the Good Deeds Cup.

To keep his team connected during COVID-19, coach Sean Kjemhus organizes virtual meetings and at one of those meetings in January, he had his players choose a charity to support. As a group, they entered into a national program sponsored by Chevrolet. It's the fifth anniversary of the challenge where Canadian minor hockey teams from across the country take part and highlight worthy charities doing good in their communities.

The winner is chosen through a public online voting process where people can submit votes daily for the team they support.

"We had to make a video on what we thought of Rocky Mountain Adaptive," said 11-year-old goalie Sam Ellis. 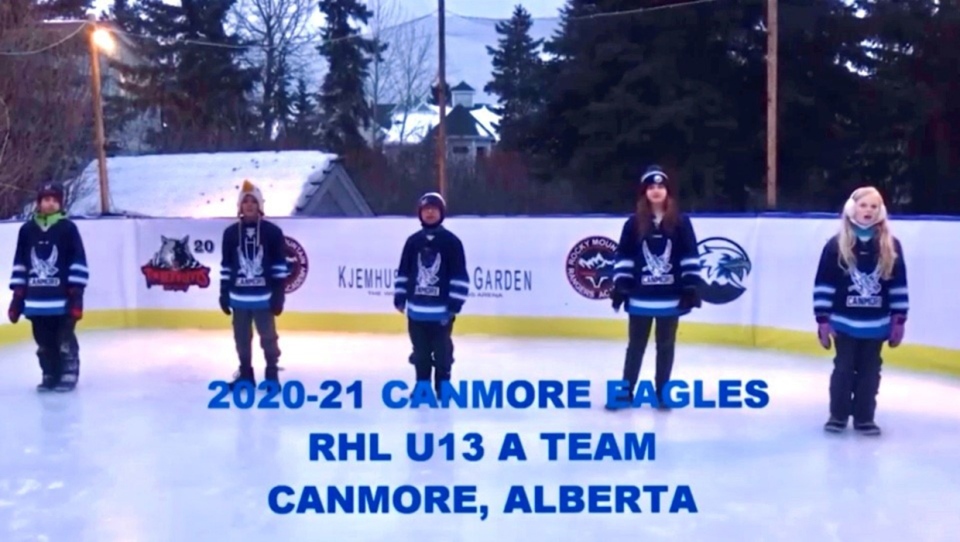 Rocky Mountain Adaptive (RMA) is based in Canmore and is a registered charity providing individuals with disabilities the opportunity to participate, learn and excel at mountain sport and recreation. According to its website it caters to all ages and abilities, providing activities in Canmore, Kananaskis, Banff, Lake Louise, and surrounding areas.

Coach Kjemhus says his team got together with RMA at Sunshine Village February 19 to learn more about the charity.

"(We got) to see the equipment, hear the instructors and listen to an athlete (about his) personal story of injury and triumph," said Kjemhus. "(It) really instilled the reality of the program."

"I think that our message is all about trying to include everyone in sport," said team manager Erin Walsh. "If they want to partake in something whether they're individuals with cognitive, developmental, physical disabilities that essentially we want to provide and Rocky Mountain Adaptive does that here in Canmore."

Cora Lee Kjemhus is also a team manager and said parents and players found out about making the regional finals February 13.

"It has been awesome," said Kjemhus. "The support from the community, from newspapers, from people you see on the street, to the schools, yeah it's been phenomenal."

Now everyone involved with the Canmore Eagles is encouraging family, friends and anyone else to go online and cast a vote so their charity can benefit from the financial donation.

Cast a vote and learn more about the team and it's charity of choice here.