CALGARY -- It was a commute to work like no other.

A 15-year-old Canmore student arrived at his summer job in north-central Saskatchewan on Monday, and all it took to get there was two months of free time and a paddle.

Zev Heuer canoed the 2,100 kilometres from Canmore to Missinipe, starting in early May.

The teenager said he was feeling a little “bored” after online classes, and felt it would be a way to inject some excitement into his spring.

“How it’s all connected is wild,” Heuer said. “Once you get out there, everything is simple. All you have to do is sleep, cook, eat and paddle.”

Heuer and his dog Blaze made the trip together. The duo slept in riverside tents and navigated rough waters and cold weather. 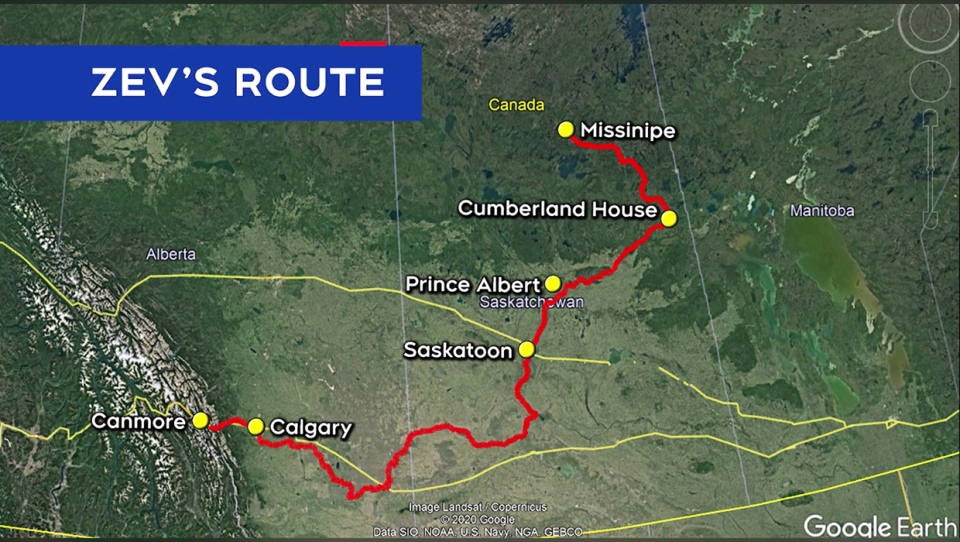 He arrived on Monday to a group of friends.

“It was awesome,” he said. “Just the idea that this thing was even possible really inspired me.”

Heuer works with the Churchill River Canoe Outfitters, an apropos job if ever there was one.

Along the way, Heuer says he experienced some “shocking” moments. He tells CTV News about icy river banks taller than his head and spotting a bear from his canoe.

He believes the journey was eyeopening.

“You can’t really plan that much, so you kind of just have to see what comes your way,” he said. “I kind of will take that with me for later in life. Whatever challenges come up, I’ll look back and say, ‘I did that trip, this isn’t something I should be worried about.’”

Along the way, his father helped out and tracked the canoe. Karsten Heuer even helped his son row during a few sections of tricky waters.

“He’s moving from boyhood to manhood, so I think it’s really important to know yourself during that critical transition of life,” Karsten said.

His parents were the reason Heuer became interested in canoeing.

In 2009, the family did a similar canoe trip that stretched 5,000 kilometres across the country.

They created a documentary, called Finding Farley, along the way.

“A big impetus for that trip was to actually go out with our son and allow him to feel the rhythms of being four months outside, camping, being on the water,“ Karsten said. “We just really wanted that to be something that laid down in his brain connections.“

“Had it not been for those trips,” Heuer said, “my parents would have not let me go (this time).”

Heuer will spend the next few months working in Saskatchewan. He says he plans to come back to Alberta in a vehicle.