Canucks weather late barrage, hold on for 4-2 win over Flames 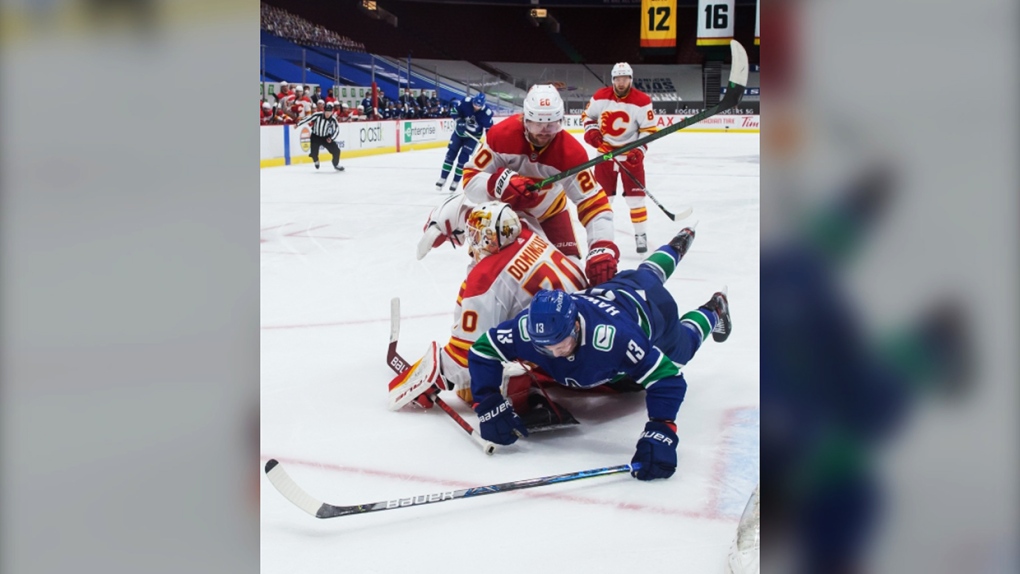 Vancouver Canucks' Jayce Hawryluk (13) falls over Calgary Flames goalie Louis Domingue (70) as Joakim Nordstrom (20), of Sweden, watches during the third period of an NHL hockey game in Vancouver, on Tuesday, May 18, 2021. THE CANADIAN PRESS/Darryl Dyck

CALGARY -- The stakes may be low, but coach Travis Green says his Vancouver Canucks are playing hard to finish out the season.

The Canucks took points from a third-straight game on Tuesday, beating the Calgary Flames 4-2.

It was a busy end to the afternoon, with three goals coming in the game's final four minutes.

Calgary (25-27-3) was down 3-0 when Adam Ruzicka went into the end boards late in the third period. The Flames forward continued battling for the puck, eventually getting it to a waiting Milan Lucic. Lucic then dished it to Andrew Mangiapane at the top of the crease and the Flames left-winger snapped it for Calgary's first of the day 16:38 into the period.

The goal was Mangiapane's 17th of the season and extended his scoring streak to four games. He has two goals and four assists across the stretch.

Eighty-two seconds later, Matthew Tkachuk sent a puck sailing in past Canucks goalie Thatcher Demko to bring the Flames within one.

Brock Boeser restored Vancouver's (23-28-4) two goal lead with 18 seconds left on the clock, sending a bouncing shot through the neutral zone and into the empty Calgary net to make it 4-2.

The strike was the right-winger's team-leading 23rd goal of the season. Boeser also had an assist on the day and extended his point streak to four games.

Travis Hamonic also put up two points for the Canucks, opening the scoring 9:43 into the first period and assisting on Boeser's empty-net tally.

The former Flames defenceman has played some “really good hockey” since returning from broken ribs at the end of February, Green said.

“When he first got here it took him a little time, he really hadn't skated for almost a year and then he got hurt,” the coach said. “While he got hurt, he got to know his teammates a little more and got his legs under him, got a bit more comfortable as far as skating. And he's been everything we thought and hoped he'd be.”

Tyler Myers also had a goal and an assist for the Canucks on Tuesday, and rookie forward Nils Hoglander scored his 13th of the year.

Demko stopped 38 shots and seemed poised for a shutout until late in the third period.

“It was a good 60 minutes. Obviously they pushed a little bit there in the third but you had to expect that and I thought we handled it pretty well,” the goalie said.

Louis Domingue played his first game for the Flames and stopped 20-of-23 shots.

The 29-year-old goaltender said Tuesday's game may have been his last in the NHL.

“In the back of my mind this might be my last game, this might not be,” he said. “I don't know what the next year is going to look like for me but I'm definitely glad I get to play and as the game went on, I definitely felt more comfortable and felt more like I belong.”

Domingue said when he signed with the Flames as a free agent in October, he believed he'd be playing more. Instead, he's spent much of the year on Calgary's taxi squad.

“To be honest I don't think that taxi squad was very good for any players,” he said. “I don't think that was a good solution for anyone and it's pretty unfortunate, because we saw a lot of guys that didn't get a lot of playing time that played in the minors and whatnot so pretty disappointed with the taxi squad situation. But it is what it is.”

The Flames and Canucks will wrap up their seasons Wednesday with a matinee in Calgary.

Calgary holds a 6-3 lead in the 10-game season series between the two sides.

NOTES: Both Vancouver and Calgary were 0 for 3 on the power play. Domingue's last game action was on March 1, 2020 when he played for Vancouver. Canucks right-winger Will Lockwood made his NHL debut. Vancouver selected the 22-year-old from Royal Oak, Mich., 64th overall in the 2016 draft. Lockwood had four goals and seven assists in 24 American Hockey League games this season.

This report by The Canadian Press was first published May 18, 2021.