Volunteers at the Last Chance Cat Ranch woke up to discover the rescue society had been vandalized overnight, when someone cut a wire fence on of the outdoor pens, allowing some of the felines to escape.

“It’s always a concern that someone might come in and so something nefarious,” said volunteer Laurie Olmsted, who came in to help round up the missing animals.

The incident was captured by surveillance cameras mounted on the property. The video shows two people approaching the front door. One of them, a woman, then makes her way into the backyard, where she crouches beside the catio, a fenced enclosure that’s attached to the garage.

Cats housed in the garage can access the catio through a small pet door.

When volunteers arrived on scene, they found an opening had been cut into the wire fence, and a number of cats were missing.

“I tear up thinking we might have cats that we might not get back. It’s terrible and it’s cruel that somebody would do this."

Last Chance Cat Ranch is a non-for-profit rescue organization that has been in operation since 2003.

Their mission is to save homeless cats and kittens, and find forever homes for strays or abandoned cats.

Founder Elizabeth Ginn said 14 cats were housed inside the garage and catio, including a pair that were in the process of being adopted. The area is also used to house some of the older, sanctuary cats with disabilities or health issues. 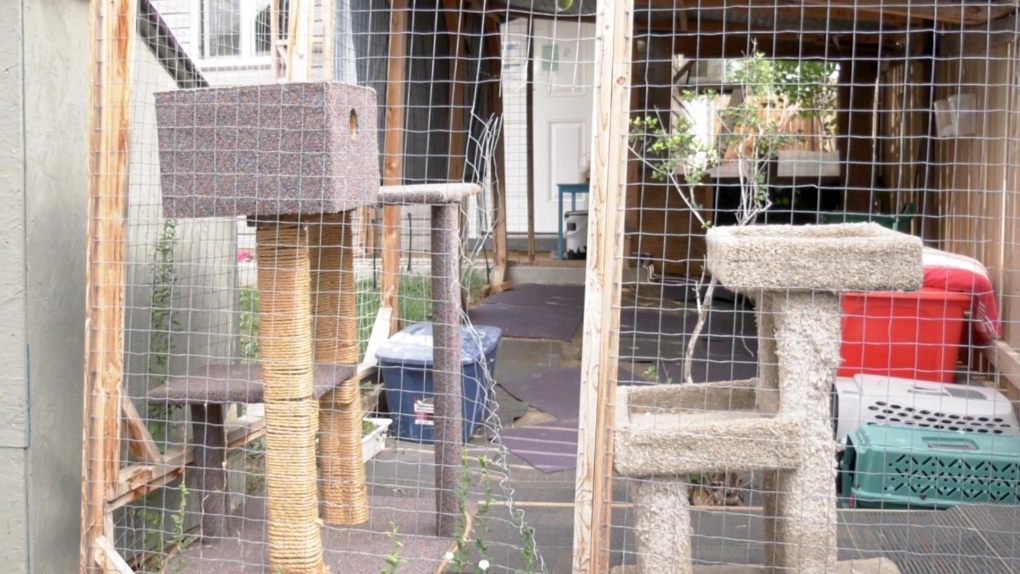 Wire was cut in fencing to allow the cats to escape. (Courtesyt Last Chance Cat Ranch)

“The catio is where they go to get fresh air, and enjoy the sun and listen to the birds,” said Ginn.

“It’s a very safe environment for them, until this.”

Not all of the cats left the sanctuary.

Hansen said several remained inside the garage or stayed nearby.

“They know my voice so I’ve been calling for them, and we did have one little guy come back," she said.

Volunteers spent the morning searching the neighborhood and have set up some traps baited with food, to try and entice them back to the yard.

As of Tuesday afternoon, three of the cats were still missing.

Olmsted said two of the animals came from a homeless situation, are quite shy, and may be difficult to catch.

“Everyone cares,” she said. “We invest a lot of time and love in these animals and to have them let go like that is hard.”

Ginn says the rescue society is looking at how it can make their property more secure, including stronger fencing or the possibility they may have to hire overnight security.

But she said those options would be an extra expense, for a non-profit that relies on public donations to cover operating costs.

Volunteers have contacted police, and said they will be handing over the surveillance video to help with the investigation.