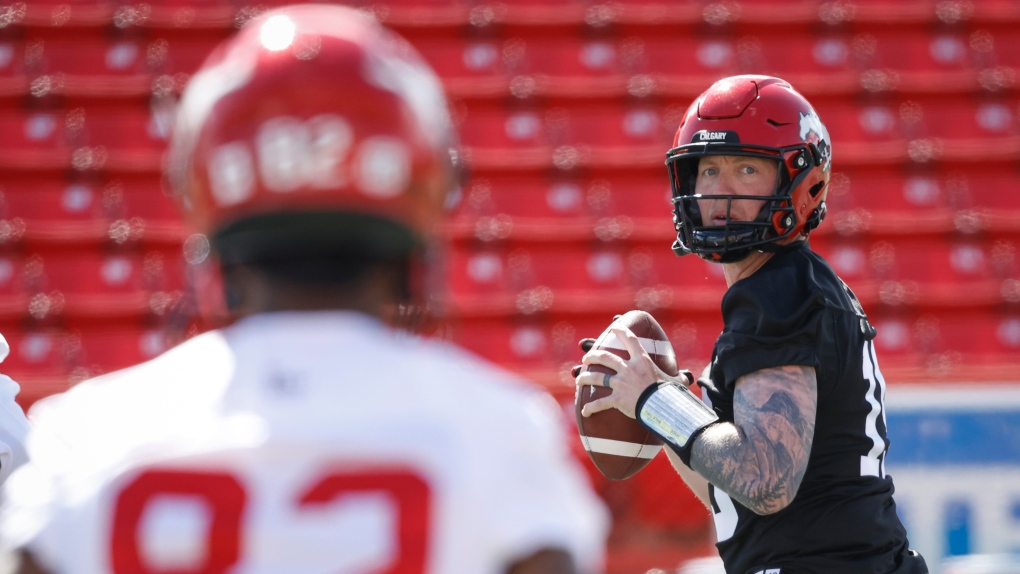 Linebacker Jameer Thurman and the Calgary Stampeders tried to return to some sort of normality at McMahon Stadium on Sunday under unusual circumstances.

After the CFL and CFL Players' Association broke off negotiations on a new collective bargaining agreement Saturday, the union directed players from seven of the league's nine teams to participate in a work stoppage. However, players with the Stampeders and Edmonton Elks reported to their respective camps Sunday since they won't be in a legal strike position until later this month, as per Alberta's labour laws.

“We shouldn't be out here right now,” said Thurman. “The rest of the league's on strike.

“We voted to be on strike as well, but the Alberta laws are a little bit different, so we're required to be out here but we stand with the PA and everything. Hopefully we can get this resolved and get back to playing football.”

On Sunday night, the Montreal Alouettes announced all of its training camp practices were being suspended “until further notice.”

The league's last labour agreement, reached in 2019 and amended last year to allow the league to stage a 14-game campaign, expired at midnight Saturday.

The lone previous CFL strike came in 1974. The labour situation was resolved before the start of the season that year.

It's unclear when the CFL and CFLPA will resume negotiations.

According to Derek Wiggan, Calgary's player rep, he and his teammates have faith a deal will get done before the Stamps would be in a legal position to join the strike action in a few days.

“We'll go through the process and then on Wednesday we'll see what happens,” said the defensive lineman, who's entering his seventh season with the Stamps. “I'm really hopeful. We trust in our bargaining team. I know they're going to get us something good, so it's just a matter of getting it done by Wednesday.”

Head coach Dave Dickenson is also optimistic a deal will get done. He said he and his staff can go about preparing Calgary for its first pre-season game May 28 when the Stampeders are slated to host the B.C. Lions.

“Everybody has that extra buzz right now,” Dickenson said. “We've been all looking forward to get 2022 started. And I tell the guys (they're) going to want to be here this year, because we're going to have a heck of a year.

Dickenson liked what he saw from his group of returning players and rookies when they took to the turf on Sunday morning.

“The energy's good,” he said. “The positivity's there. The players are committed. Coaches are excited to see what we've implemented (and) whether we can get that communication to the players and take care of the details.

“Also, there's decisions being made in three days as far as who makes the team and who doesn't, so we control what we can control.”

Shortly after talks broke down Saturday, CFL commissioner Randy Ambrosie went public with the league's final offer to the union. But in a memo to its membership, the CFLPA said Sunday the league's proposal was summarily rejected by both Alberta teams.

“After having commissioner Ambrosie outline the CFLs proposal in a letter to our membership (Saturday), we conducted our Alberta strike (Sunday morning).

“Ninety-nine per cent of our members voted to strike the CFL, which can only be interpreted as a 99 per cent rejection of the CFL's offer. We reiterate our offer to the CFL to return to the bargaining table and negotiate in good faith.”

And the CFLPA said if the CFL chooses not to resume negotiations soon, it will have a full-blown strike to deal with.

“Our Alberta members will be off the job later this week and on strike with the rest of the CFLPA members if the CFL does not return to the bargaining table and we reach a fair agreement,” the memo said.

Despite all the unknowns with how the labour situation will pan out, veteran quarterback Bo Levi Mitchell said it was great to be back practising with his teammates.

“The locker-room feels awesome because guys are just excited to be back playing football,” said Mitchell, who acknowledged that outside factors have complicated matters somewhat. “Obviously, the players, we want a deal done because we want to be here playing football when it comes to June. As fast as that can happen would be great.

“It would be awesome to know that all the other teams are out there practising as well. Right now, for our mindset, is at the minimum right now we've got three days of practice, so we're going to go out there and focus on that.”

Despite his insistence that training camp shouldn't have started amid the labour strife, Thurman decided to make the most of a bad situation.

“It's just good to be back out here going over the plays and learning the system again,” said Thurman, who's expected to be one of the leaders on defence again this season after serving as a team captain last year. “I've always had to step up since I've been here.

“I've always known that a lot of people consider me a leader on this defence, so it's the same thing. Nothing's changed. I still expect to perform at a high standard and bring guys along with me.”

This report by The Canadian Press was first published May 15, 2022

After going for drinks this week, an unnamed worker lost a USB flash drive containing the personal details of every resident of the Japanese city of Amagasaki, according to a statement from the city's government.

A new study has found that breast cancer can metastasize more efficiently while people are sleeping, a finding researchers say could 'significantly change' the way cancer is diagnosed and treated.