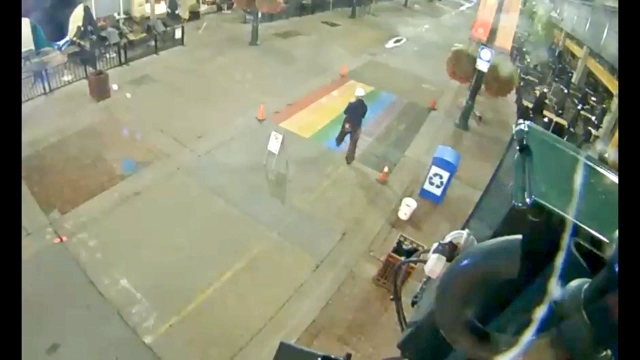 Police have charged a man with mischief relating to a pride crosswalk being vandalized and are still working to track down a suspect believed responsible for a second, similar incident.

Police have laid charges against a man accused of defacing the pride crosswalk in downtown Calgary and say the case will proceed as a hate crime.

Just before 8:30 a.m. on Sunday, someone scrawled a message on the pride crosswalk on Stephen Avenue which incited violence against the LGBTQ community.

Surveillance video captured the vandalism and police released an image of a suspect on Monday.

On Tuesday, police announced Kevin James Gavel, 54, is charged with one count of mischief. He is scheduled to appear in court next Oct. 1 and has been ordered to stay at least 500 metres away from the crosswalk on Stephen Avenue, near Centre Street S.

“The case will proceed as a hate crime file and be designated to a Specialized Crime Crown Prosecutor,” police said in a release.

That could mean tougher sentencing if the charge results in a conviction.

The defacing of the pride crosswalk was one of two incidents of vandalism reported in recent weeks.

In the early morning hours of Aug. 14, surveillance footage released by police shows a person set up pylons around the pride and trans crosswalk along with a road closed sign, before writing ‘LOST’ on one and ‘LUST’ on the other.

Police said several taxis were in the area at the time, along with a jogger, and they are hopeful these people will come forward with information.

A vehicle was also seen trying to turn from Centre Street onto Stephen Avenue, but was blocked by the sign.