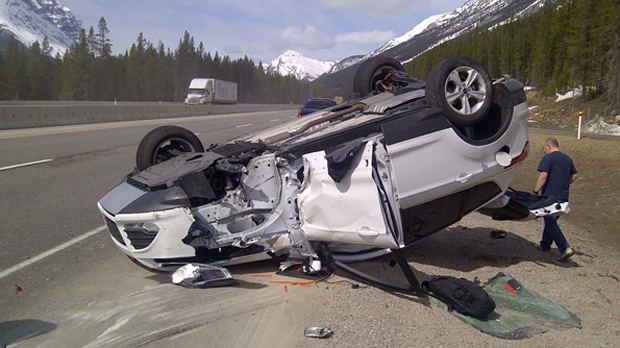 A Friday morning crash on the TransCanada Highway, near the British Columbia-Alberta border, left one SUV badly damaged and on its roof, but the occupant suffered only minor injuries.

Sgt. Jeffrey Campbell of the Lake Louise RCMP detachment said the crash occurred when a Toyota Prius parked on the shoulder of the highway was struck by a Ford Escape. The impact of the crash caused the Escape driver to lose control of their SUV and the vehicle slid across the pavement before flipping and coming to a rest on its roof.

The three occupants of the parked vehicle were assessed by EMS at the scene. A 9-year-old boy was transported to the Banff hospital as a precautionary measure.

The Ford Escape driver, an unidentified person from British Columbia, was transported to hospital by ambulance in stable condition. Their injuries are not considered serious.

Speed and alcohol do not appear to be factors in the crash, but RCMP believe distracted driving may have contributed to the collision. Charges are pending against the driver of the SUV.