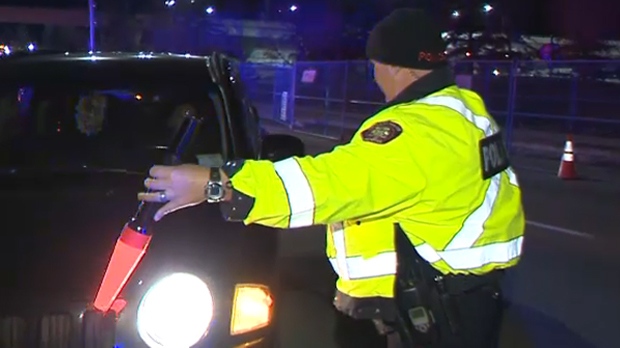 A CPS member conducts a checkstop in downtown Calgary on Friday, October 26, 2018

Members of the Calgary Police Service traffic unit were armed with increased knowledge of cannabis use ahead of legalization in Canada and the officers continue to enforce the rules of the road at checkstops.

“There are more and more officers that have had the opportunity for training and were given the training up before the October 17th date so that we were prepared when the legislation did come into effect,” said Acting Sergeant Chris Agren at a Friday night checkstop in downtown Calgary. “The difference is when the window opens and you’re speaking with a member of the public who is driving, where’s the evidence going to take you? Are you looking at indices for alcohol or are you looking at indices for drug impairment. Based on what is presented to us is where we investigate and how we investigate.”

Agren says he has not issued a single ticket for cannabis impairment in the last nine days and adds that all types of impairment have been, and will continue to be, investigated on city streets.

“We’ve been looking for both things (alcohol and cannabis) and all other signs of impairment all along whether that’s being too tired or even prescription drugs. We’re always looking for some kind of indicia that a driver’s ability to operate a motor vehicle is impaired whether that’s with alcohol or with drugs.”

Agren says signs of impairment by cannabis include glassy, bloodshot eyes, the odour of marijuana, slurred speech and reduced motor skill function and there is currently not a pre-screening detection device for cannabis that is available to CPS members.

“With cannabis you’re looking for purely physical indices of impairment. You’ll conduct a standard field sobriety test and based on the results of that test that person is then presented in front of a drug recognition expert which will then be able to determine the impairment of the individual.”