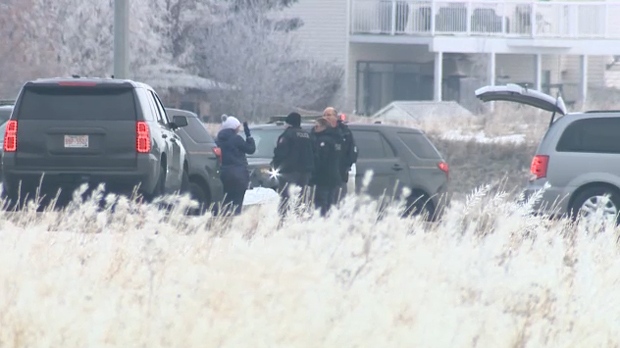 CPS members on McKnight Boulevard, between 68 St and Stoney Trail NE, following the fatal shooting of a suspect on Christmas Day

CTV News has learned that the Calgary Police Service member who fatally shot a suspect on Christmas Day in the city’s northeast had been involved in a previous police response where a suspect was killed.

Multiple sources confirm to CTV that Stephen Cook was the officer who shot 29-year-old Stacey Perry along McKnight Boulevard between 68 Street and Stoney Trail N.E in the early morning hours of December 25, 2018.

The incident followed an investigation into a Honda sedan that was being driven in an erratic manner near 9 Avenue and Blackfoot Trail Southeast shortly after midnight. After three failed attempts to stop the suspect vehicle, police called off their pursuit.

Nearly two-and-a-half hours later, reports indicated a car matching the description had been running red lights and driving in the oncoming lanes of traffic near the northeast neighbourhood of Falconridge. Police located the vehicle and blocked it in a short time later along McKnight Boulevard. According to the Alberta Serious Incident Response Team (ASIRT), the woman behind the wheel attempted to drive her vehicle at police officers who had exited their units and shots were fired at the suspect. The suspect, later identified as Stacey Perry, was pronounced dead at the scene.

ASIRT is investigating the actions of the CPS member who fired their service weapon during the December 25 incident.

Sources tell CTV that Stephen Cook, a ten-year veteran of the Calgary Police Service, has been placed on 30-day administrative leave.

Cook, who serves as a patrol officer, was also involved in the fatal shooting of 40-year-old Corwin ‘Corey’ Peeace in 2011 in Erin Woods. The officer’s actions in the killing of Peeace were found to be justified by an ASIRT investigation as the suspect was armed with a knife and had been threatening people. Cook fired four shots at Peeace during the incident.

The Erin Woods shooting was not Cook’s first encounter with Peeace as, in 2010, the officer discharged a stun gun at Peeace during a police response.

Doug King, a professor of justice studies at Mount Royal University, says it would not surprise him if the investigation determines that the officer who was involved in two separate fatal shootings happened to be  'in the wrong place at the wrong time' and says there is absolutely no reason to suggest that police officers are 'gun happy'.

"They are actually trained not to be gun happy," explained King. " If this officer has been involved in previous incidents it will typically be nothing more than coincidence but, saying that, let’s wait for ASIRT to do its investigation and find out.”

Les Kaminksi, president of the Calgary Police Association, released the following statement to CTV on Friday regarding the investigation into the officer’s actions in the December 25, 2018 shooting of Stacey Perry and the likelihood of one officer being involved in multiple deadly shootings:

Every police officer comes to work with the hope that they won’t have to use force against another individual, and that they will get home safely at the end of the day. However, it is our duty to protect the public, other officers, and ourselves. This is the harsh reality of police work.

A police officer will answer thousands of calls throughout their career. These calls come randomly and are out of the officer’s control. We just never know what we may face when going from call to call. Thankfully, the majority of police officers go their entire careers without being forced to take a human life, however, fate dictates that occasionally an officer may be involved in multiple events.

Our citizens can have confidence because when a critical incident does occur, it is carefully scrutinized on its own merit. The actions of every officer involved is meticulously dissected, and each case is judged independently. The actions taken by the officers are either justified, or they will be brought to task. We have complete confidence that this investigation will be no different.

With files from CTV’s Brenna Rose