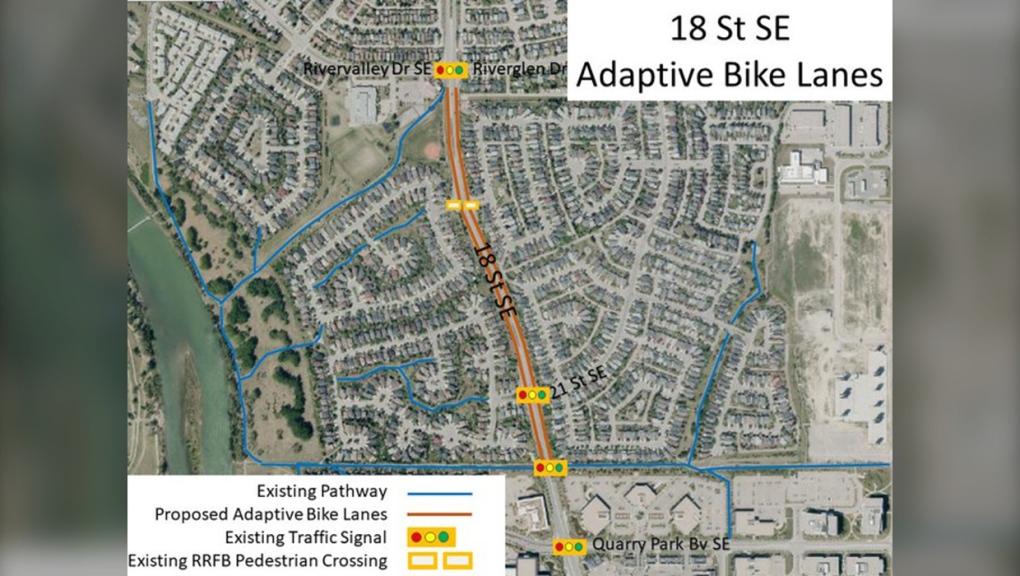 The lane was launched on 18 St. S.E. to address concerns about traffic and safety in the community. Until September 12, 18 Street will be reduced to a single lane in each direction between Quarry Park Blvd. and Rivervalley Dr. S.E.

The City of Calgary is looking for public feedback to its new adaptive cycling lane, which it opened in southeast Calgary Friday.

The lane was launched on 18 Street S.E. to address concerns about traffic and safety in the community. Until Sept. 12, 18 Street will be reduced to a single lane in each direction between Quarry Park Boulevard and Rivervalley Drive S.E.

The city said that concerns have been expressed by Riverbend Community Association about heavy traffic, vehicle noise and safety concerns for pedestrians and cyclists on 18 Street. There have also been questions raised about high-speed cyclist commuters along the Carburn Park pathway.

The adaptive cycling path will create separation between people travelling in different modes at a variety of speeds, which it hopes results in improved safety, predictability and comfort.

It will also reduce the width of 18 Street, encouraging lower speeds and the use of 24 Street instead.

Also, children will have a space to use active modes of travel without impacting pedestrians on sidewalks.

It will also create a space for commuter cyclists, which will leave the Carburn Park pathway for slower users.

Bike Lane Pilot: A bike lane pilot project on 18 St SE was launched today to address concerns about traffic and safety. Until Sept 12, 18 St will be reduced to one lane in each direction between Quarry Park Blvd and Rivervalley Dr SE. Give feedback here https://t.co/Z0i99ztzqv pic.twitter.com/SNnnHyR85S

The city said it is exploring options for permanent traffic calming measures along 18 Street in its next budget cycle (2023-26), but felt a need to address community concerns now.

"This pilot project is a step in the larger conversation on future, more permanent treatments to address the concerns raised by residents in the area," the city said on its website. "We look forward to starting a conversation about how we can rethink our roadways to make them more accessible for all community members."

In the first footage of its kind, scientists captured the moment a pod of orcas hunted great white sharks in South Africa.

A Texas death row inmate whose case redefined the role of spiritual advisers in death chambers nationwide was executed Wednesday, despite the efforts of a district attorney to stop his lethal injection.

The Colorado baker who won a partial Supreme Court victory after refusing on religious grounds to make a gay couple's wedding cake a decade ago is challenging a separate ruling he violated the state's anti-discrimination law by refusing to make a cake celebrating a gender transition.

Eric Weinberg, an executive producer and writer for the hit TV show 'Scrubs' and many others, has been charged with sexually assaulting five women that he lured to photo shoots and there could be many more victims, Los Angeles County prosecutors announced Wednesday.

As the holiday season approaches, food banks across Canada are desperate for donations due to an increasing amount of clients. As inflation hits all Canadians, those who feel the impact most are the vulnerable communities with the highest food insecurity rates.