Three men killed in an avalanche in Banff National Park had successfully summited Howse Peak and were on their way back down when the slide hit, according to family members.

Jess Roskelley, David Lama and Hansjörg Auer were reported missing Wednesday after failing to check in with family following a summit attempt on the east face of Howse Peak, near the Icefields Parkway in Banff National Park. The three were members of The North Face’s Global Athlete Team.

Their bodies were recovered on Sunday.

Incident commander Shelley Humphries said during a press conference Monday that members of the RossKelley family confirmed to Parks Canada offiicials they had summited the peak.

An aerial search was launched Wednesday as soon as the trio were reported missing, which found several slide paths and debris containing climbing equipment.

A transceiver was placed in the area as the increased risk of avalanches made a ground search impossible.

Bad weather then kept searchers off the mountain on Thursday and Friday.

On Saturday, searchers were flown into the area using long lines where they used probes to search for the bodies while still attached to the lines in case another avalanche was triggered.

That proved unsuccessful, and on Sunday, an avalanche dog and handler were inserted, also using long lines.

The dog was able to find the men’s bodies and a recovery team was sent in. 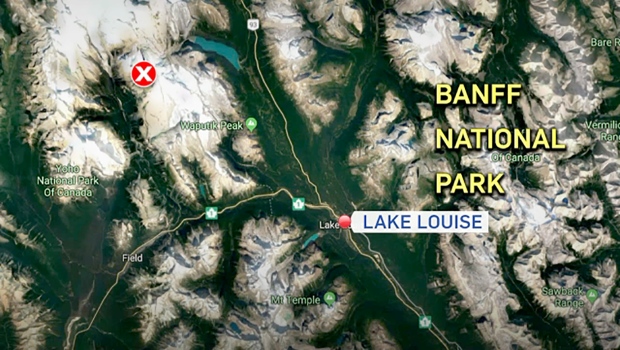 “Parks Canada extends our sincere condolences to the Roskelley, Lama and Auer families, as well as their friends and loved ones,” she said.

“Parks Canada would also like to acknowledge the impact that this incident has had on the tight-knit, local and international climbing communities.”

Only one other group has previously completed that particular route of the Howse Peak climb. Barry Blanchard, who resides in Canmore, and two of his friends navigated the route in 1999 but Blanchard broke his leg along the way and had to be flown out.

In a separate incident Saturday, three people were caught in a slide on the Des Poilus Glacier on the Wapta Icefield, northwest of Lake Louise.

One member of the group was airlifted to hospital in life-threatening condition about 4:30 p.m. where he later died of his injuries. The man’s name or where he is from have not been released.

The two other people he was with were unhurt.

The avalanche danger in Banff, Kootenay and Yoho National Parks currently ranges from low to high.