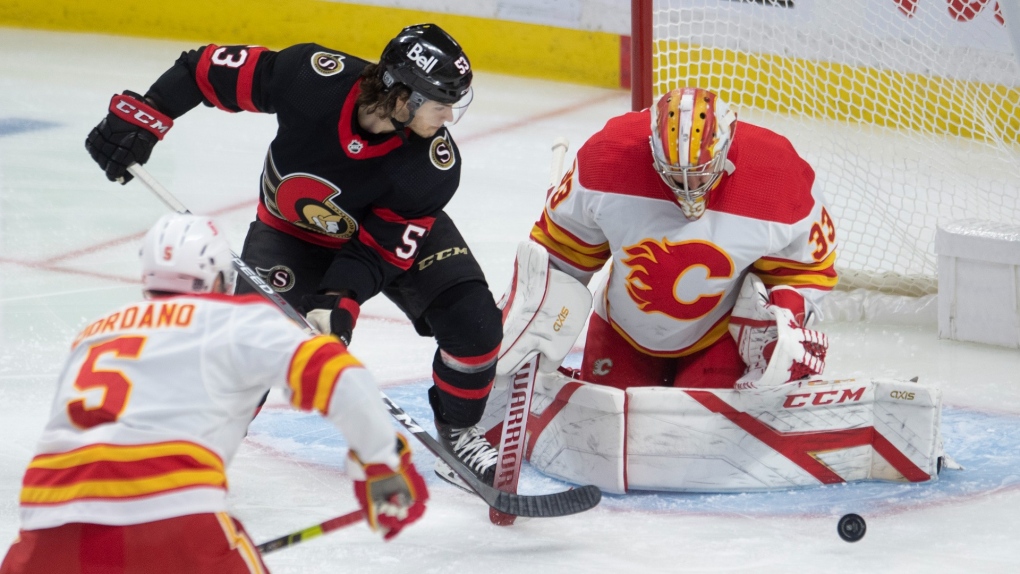 OTTAWA -- Matt Murray and the Ottawa Senators have their longest win streak of the season.

Murray stopped 29 shots while Drake Batherson extended his goal streak to four games as Ottawa earned a 6-1 decision over the Calgary Flames on Thursday. The win was the Senators' third straight as they improved to 5-2-0 in the last seven contests.

"If we start getting into a run-and-gun style game then we're probably not going to have as good a chance to win. I think tonight was a good example of what it takes to win on any given night and now difficult it is. I love the direction we're headed."

Colin White scored twice for Ottawa (7-14-1). Erik Gudbranson, Connor Brown and Erik Brannstrom had the others.

"You know what? You never critique a win," Ottawa head coach D.J. Smith said. "We found a way to score early and took the pressure off us.

"But there's probably been four or five games of late that we've played better and didn't get that result. It was just one of those games where everything went our way."

Milan Lucic replied for Calgary (9-10-2), which was playing for the third time in four nights. And while the Flames came in having won three of the previous four meetings with Ottawa, they're 1-4-1 in their last six games overall.

It was the first of three straight games between the two teams in Ottawa. They meet again Saturday afternoon before finishing up Monday night.

"I thought that was Matt Murray's best game this year," said Smith. "He looked really calm back there.

"We hung him out to dry in the third period and gave them some Grade-A chances that we shouldn't have given but he made the saves and he looked really good doing it."

Murray was sharp in the third as Calgary outshot Ottawa 15-8 in the period. Overall, the Senators held a 31-30 advantage in shots on goal.

But Murray said his teammates performed solidly in front of him.

"We did the best job we could've staying above them trying to keep their chances to a minimum," he said. "That's a really, really dangerous team.

"The way we played in the (defensive) zone, we just kind of kept them to the outside. A lot of really good things to build off of moving forward until the next one."

Batherson opened the scoring at 7:45 of the first period. David Rittich made the save on Tim Stutzle's shot but Batherson fired the rebound past the Flames goaltender for his sixth of the season.

Lucic pulled Calgary to within 2-1 with his fifth 1:41 into the second. But Brown restored Ottawa's two-goal lead at 4:39, intercepting a pass deep in the Flames zone and beating Rittich on the backhand unassisted for his fifth.

"I thought we did a really good job and responded well after that (Lucic) goal," Murray said. "I like how we really didn't sit back.

"We kept going and got a few more goals coming out in that third period I think that was huge."

Brannstrom put Ottawa up 4-1 at 7:24. He blasted a rolling puck from outside the blue-line past Rittich, his second of the year and second in as many games. Shortly afterwards, Calgary made the goaltending change as Artyom Zagidulin got into his first NHL game replacing Rittich, who allowed four goals on 20 shots.

"He (White) was dinged up there . . . the last little bit and that affected him," Smith said. "When pucks go in for guys all of a sudden . . . they start skating and they start making plays.

"He's been really competitive, he's been a great teammate throughout this. He's playing well."

While admitting Thursday's victory was far from a complete performance, Ottawa defenceman Thomas Chabot said there are many benefits to winning.

"It's good for everyone," he said. "Everyone gets more confidence, everybody makes more plays, everybody is happy coming to the rink, everybody's in a good mood.

"It's just great for the team overall."

This report by The Canadian Press was first published Feb, 25, 2021.