The Stanley Cup was in Alberta on Monday, brought to Innisfail by former resident Ray Bennett.

The assistant coach with the Stanley Cup-winning Colorado Avalanche paraded down Main Street before being greeted by hundreds of fans lined up outside the Innisfail Twin Arena eagerly waiting the arrival of the championship trophy.

Bennett says winning was the "greatest achievement" of his entire career.

"You don’t chase this dream, you live it," he said.

"It was never my goal to coach in the NHL, and yet somehow it happened," Bennett said. "I wouldn’t have looked at my career as any less successful, but this is the crowning glory."

On Monday, he used his time with the Stanley Cup to fundraise for local hockey programs and give back to the community where his NHL dream began.

"It’s super special and you never know in coaching and parenting what kind of moment will ever touch a child to help them or inspire them," he said.

"So if this helps somebody, whether it’s in hockey or other things, to achieve in life, then that’s perfect." 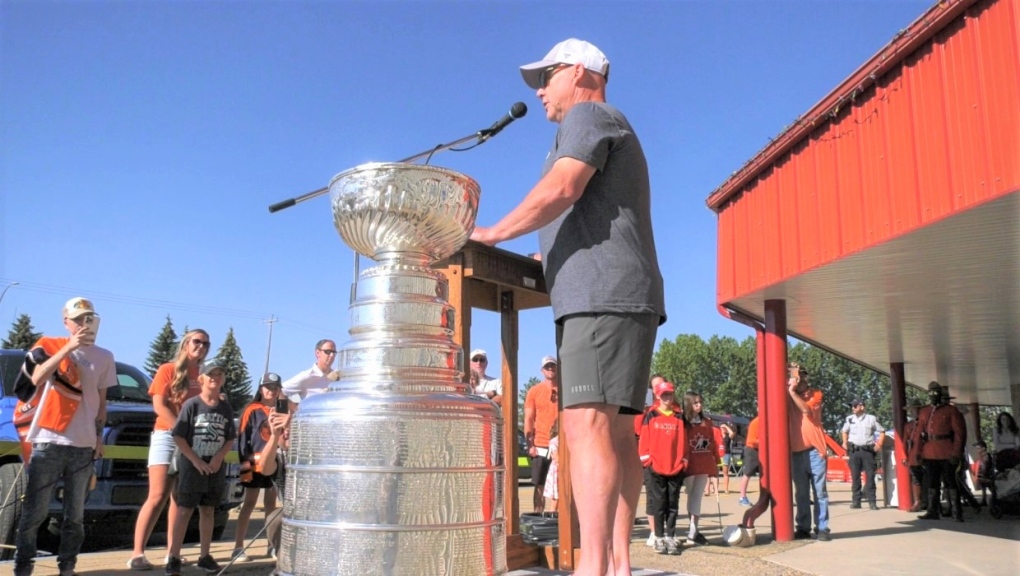 Ray Bennett, assistant coach with the Colorado Avalanche, brings the Stanley Cup to Innisfail, Alta. on Monday, Aug. 8, 2022.
The moment was especially impactful for eight-year-old Parks Lattery who plays minor hockey with the Innisfail Flyers.

"It was so cool," Lattery said.

"It’s definitely my dream and I think everybody wants to hold the Stanley Cup."

Others, like nine-year-old Raelynn Goett, were in awe of how large the Cup was and how it sparkled.

"It was just very, very, very exciting," she said.

Ray Bennett, assistant coach with the Colorado Avalanche, speaks with eight-year-old Parks Lattery in Innisfail, Alta. on Monday, Aug. 8, 2022.
Perhaps nobody was more proud, however, than Bennett’s older brother Dale.

He spoke highly of his sibling, who he says worked tirelessly to achieve his NHL career, adding that the decision to bring the Stanley Cup back home to Innisfail was made minutes after winning the championship.

"We were once those same kids, wearing these minor hockey jerseys, so to see all of them so excited and in the procession to the rink and the look on their faces, it’s just amazing," said Dale.

"We lost both our parents fairly young and just thinking about the things that they drilled into us – which was annoying when you're 12 – but a lot of that was connected to helping him along the way. It’s just overwhelming."

Bennett was first asked to coach a Pee Wee team during his stint as a player with the Innisfail Eagles. After that, he landed a job with Hockey Alberta, coached youth hockey in Red Deer, became a coach at Red Deer College and an assistant in the WHL.

Bennett also worked for Hockey Canada, winning silver medals at the World Junior Ice Hockey Championships and with Canada’s Women’s Team at the 1998 Olympics in Nagano.

He then began his coaching career in the NHL working with the Los Angeles Kings for seven seasons, the St. Louis Blues for 11 seasons and the last five with the Colorado Avalanche.