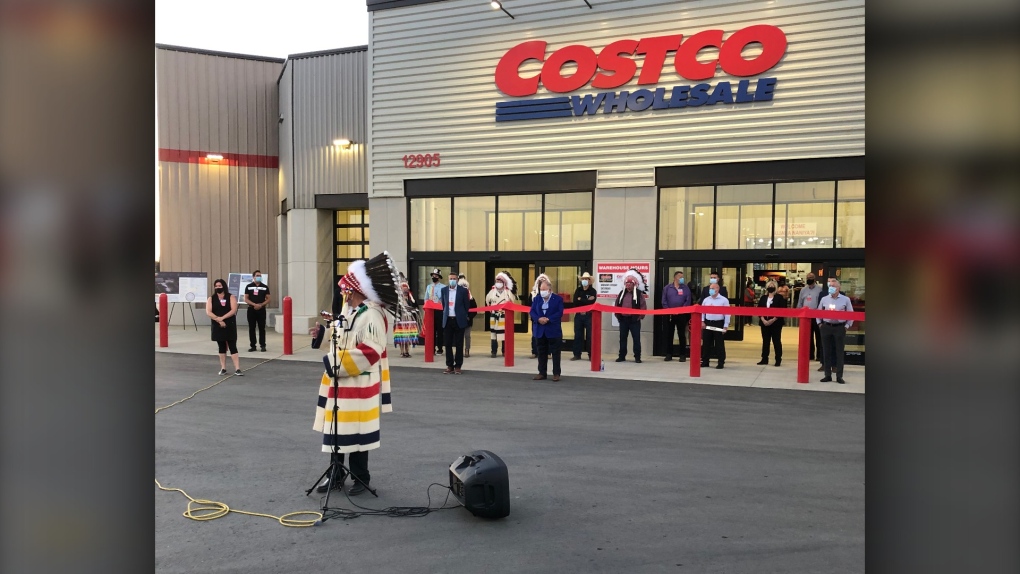 Chief Roy Whitney of the Tsuut'ina Nation delivers a speech at the opening of the Costco location at The Shops at Buffalo Run, west of Calgary, on Aug. 28, 2020

CALGARY -- The doors have officially opened at a new Costco location just west of Calgary city limits, the first tenant of The Shops at Buffalo Run in the Taza development.

The Costco at 12905 Buffalo Run Blvd. is the company's first warehouse in Canada to be situated on a First Nations development.

The store — located near the intersection of 130 Ave. S.W. and Tsuut'ina Trail, the southwest leg of the ring road — opened Friday with Tsuut'ina Nation Chief Roy Whitney addressing dignitaries, store staff and a long line of Costco members eager to step inside.

Costco hosted an employment fair for Tsuut'ina members in June to fill some of the 80 positions at the warehouse.

David Skinner of Costco Wholesale Canada says the store fills a void for residents of Tsuut'ina and southwest Calgary.

"With the opening of our seventh warehouse in Calgary, including the surrounding area, we can provide southwest Calgary with a more convenient shopping experience," said Skinner in a statement. "We are excited to be working with the Tsuut'ina Nation at Taza, and be able to give our valued members, businesses, and the surrounding community the advantage of shopping locally."

Chief Whitney says Nation members, Calgarians and visitors from outside the area are welcome.

"They're welcome into our development as it evolves, to go into Costco, enjoy yourself, it's a beautiful space," said Whitney. "As this relationship evolves with the commercial side and building retail office tower space, medical space — it keeps going — it's going to create opportunities for Calgarians as well as our own people."

Once completed, the 1,200 acres of the Taza development that stretches along the ring road from Glenmore Trail to Fish Creek Provincial Park will house retail outlets, business parks and entertainment facilities.

According to Taza officials, additional stores are slated to open in The Shops at Buffalo Run in the summer of 2022. The company has not disclosed a list of confirmed retailers.