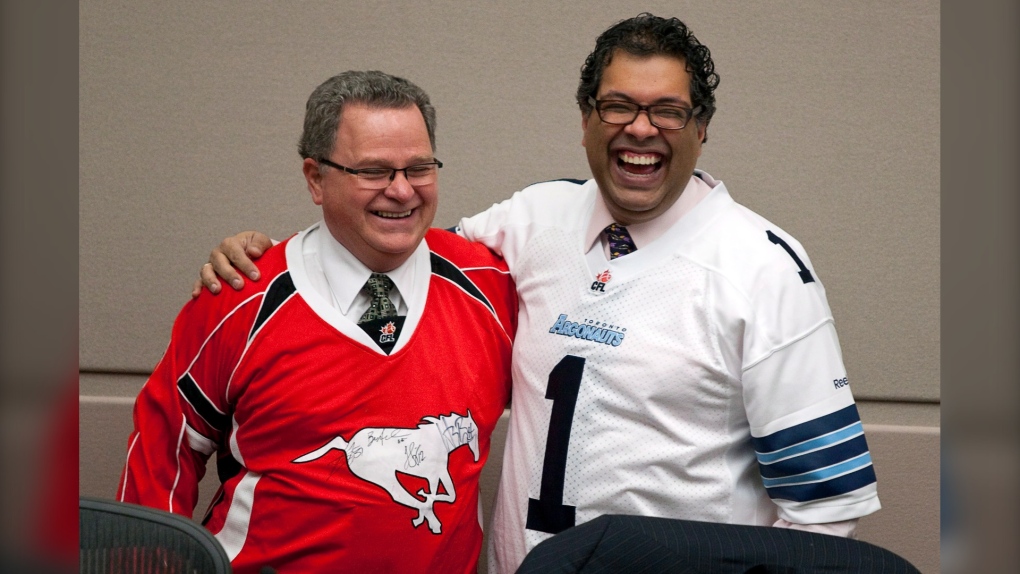 Coun. Shane Keating, left, and Mayor Naheed Nenshi share a laugh during their first term on council in 2012. Keating has announced he won't seek re-election in 2021.

CALGARY -- With a revised Green Line plan now approved, Ward 12 Coun. Shane Keating has announced he will not seek re-election in 2021.

The announcement was made in a 9:46 video posted online Monday. Some of the reasons for stepping away from politics are personal and others are professional, he said, but the decision largely centred around the Green Line being moved forward.

"I do believe in terms limits to a degree, and for me, three terms is the right number to serve," he said.

"I believe Ward 12 needs someone who will be able to aspire to be your councillor, continue with enthusiasm and the ability to collaborate and compromise with the rest of the city to improve our ward and our city."

Keating also talked about his wife's battle with cancer, saying she has undergone several surgeries since being diagnosed in 2019.

"I believe that should be my priority," he said.

"My wonderful, loving wife, who is my best friend, she has been there for me to make my own decisions, ensuring I am happy and follow through with some of my life's goals."

In the video, Keating said council's decision to approve a revised plan for the Green Line, which will see the first stage run from Shepard in the south to 16th Avenue in the north, will be beneficial in the decades to come.

"Yes, we're having some troubled times at this point. The pandemic, the economic downturn is addressing some of the situations in a way in which Calgary will grow in the future," he said.

"But with the historic decision of approving the Green Line, that growth will continue to be positive. It will take time, but we've seen this situation in the past, going all the way back to the 80s and 70s, and then today, 2020."

Keating said he found humour in reading headlines from the archives, including one from 1977 saying a community group wanted LRT transit plans derailed, similar to opposition against the Green Line seen in recent weeks and months.

Another headline from 1982 talked about the city being advised against expanding the rail system.

"It is also interesting that in all three scenarios, today, (in the) 80s and in 1977, the economy was down, looked bleak, and we have the call of 'Don't do it because we don't know what's coming in the future,' of, 'How could you plan to do something so risky as the Green Line?' Had they not built the first LRT, beginning in the 70s, with discussions of extensions by (former premier) Ralph Klein, what would our transit system look like today?"

The capital budget for Stage 1 of the Green Line sits at $4.9 billion, but the total cost could balloon to $5.5 billion when the potential cost of interest paid on city debt is factored in.

The federal and provincial governments have each pledged $1.53 billion toward the project.

Stage 1 is 20 kilometres and will include 15 stations. The entire Green Line will eventually run 46 kilometres.

Construction on the first segment of stage one could start in spring 2021.

"I also hope that the style of the next individual is similar to the two saying I have always held dear: 'I will fight for Ward 12 but not at the detriment of the rest of the city,' and I think that's exactly what I've done with the Green Line," Keating said.

"Although it didn't get as far south as I would have liked to, it is setting the stage for a fantastic LRT line in the future, and where we can add, station-by-station, both south and north.

"The next saying I have honoured, is that 'the job of a public servant should never be the best job you ever had, because then the job becomes more important than the job you were elected to do.' I've held true to both of these across all aspects of decisions I have made in the past 10 years. I certainly didn't make everyone happy but I believe I made the best decisions at the right time for the city and for Ward 12."

It’s been a pleasure, Shane!