The portfolio of third-term Ward 4 Coun. Sean Chu will be minuscule after a majority of his fellow members of council voted in favour of limiting his service.

By a vote of 9-6, council voted Monday morning to suspend the requirement that seven councillors sit on each committee. The move will block the embattled Chu from serving on boards, committees or commissions but he will still have the right to attend or vote.

Calls for Chu's resignation have grown in strength since details surfaced ahead of the election that he had been the subject of a conduct review during his time as a Calgary Police Service member where he admitted to a sexual encounter with a 16-year-old girl in the late 1990s when he was 34.

Chu received a reprimand on his police work file.

Political observers say Chu's icy relationship with this new council is being closely monitored and Monday's vote shows that the Ward 4 councillor is being made an example of, with Chu being held responsible for past transgressions.

The motion to block Chu from taking on additional work and responsibilities sparked debate within council chambers.

Those opposed voiced their concerns the move could potentially set a precedent and lead to the exclusion of more members of council.

Proponents argued the past actions of a councillor do affect the present and it's in no one's best interest to simply move on.

"When the spirit of the law is not being followed, I think you have to bolster the letter of the law to get your point across," said Carra.

"This was an effort by council to do what they could," said Mayor Gondek. "We have very limited abilities and powers in council, (and) we exercised one of those today."

Ward 7 councillor Terry Wong was one of six to vote against the motion. He wants results from a provincial investigation and the legalities first, before making a decision.

"I think any ward constituent would be concerned if their elected official are not able to perform their duties," Wong said.

Chu participated in the first sitting of council remotely and offered an apology to his fellow members of council.

"I just want to, again, apologize to everyone involved, including council members, that we have to go through this right now," said Chu, adding that he meant no harm whatsoever. "My intention has always been to serve to the best of my ability to the Ward 4 resident and to the citizens of Calgary.

"I believe that taking me out of any standing policy committee is improper that, basically, we are slapping the electors on the face in Ward 4."

Later Monday, Chu tweeted a response to the council motion, but it was soon deleted from his timeline.

"I was duly elected by Ward 4 and I will continue to serve. and help every resident of my Ward who needs help," Chu wrote. "The same thing I have done since 2013."

"While I am disappointed by Councils decision today, I will still participate in Committees, as I must still make informed decisions when I vote in Council."

"I will continue to reach out to my fellow colleagues, as I have already done to answer any questions they have and provide all the facts on the 1997 investigation."

"I also apologized to Council this morning for having this investigation overshadow Councils (sic) first day of term." 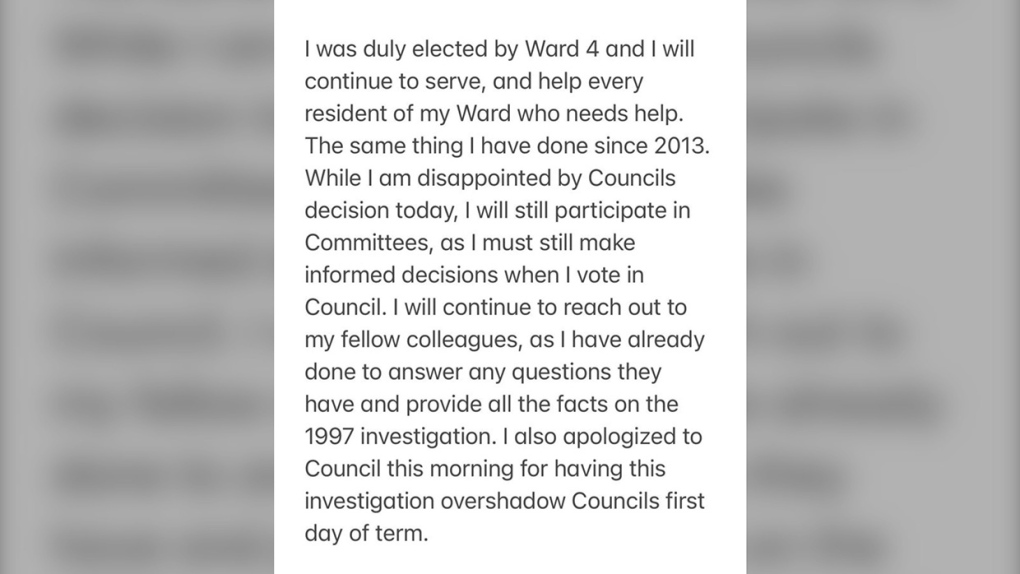 With files from CTV's Stephanie Thomas.