Newly released court documents show the Alberta RCMP are still investigating multiple people in connection to the Coutts border blockade, including a suspected group of leaders issuing orders from elsewhere.

According to the unsealed documents, the RCMP believes the four men accused of plotting to kill Mounties at the Coutts border blockade – Anthony Olienick, Chris Lysak, Jerry Morin and Chris Carbert – were being given orders by an outside leadership group.

The names of the people in that group have been redacted from the report as they are part of an active investigation.

The newly released records involve transcriptions of phone calls between Olienick, Lysak, Morin and Carbert, and the unidentified leadership group.

The documents state the leadership wanted more than just vaccine mandates lifted, but also the "elimination of the professional political class."

It also alleges Olienick, Lysak, Morin and Carbert trained for months and stockpiled firearms at Olienick's property near Claresholm, Alta., while taking orders from the unidentified group. 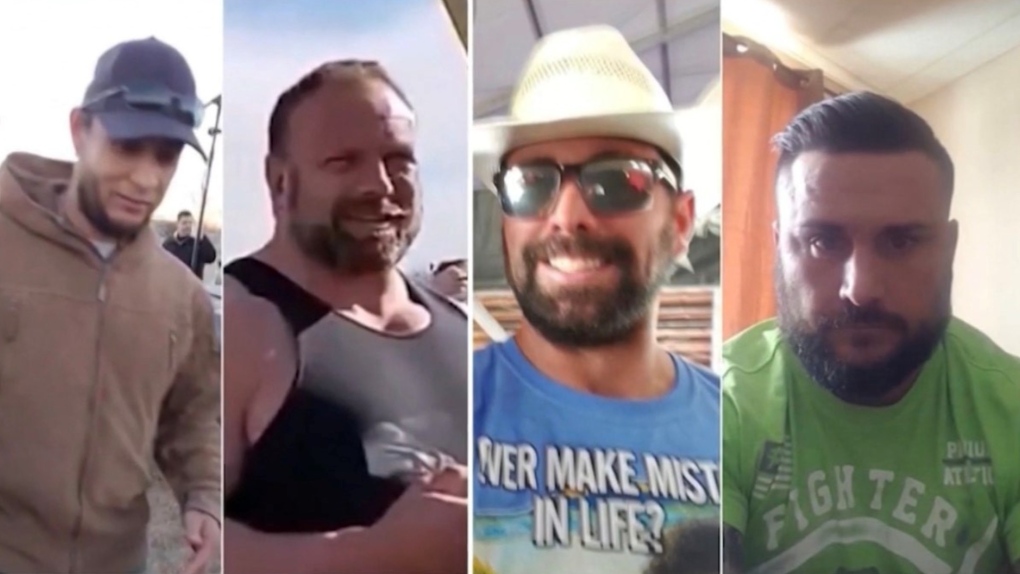 The documents reveal that in February, Mounties seized more than 36,000 rounds of ammunition, two pipe bombs, gas masks, camouflage and tactical gear from the property.

Other intercepted calls from the four men's cellphones refer to more potential weapons coming from a second stockpile in Nanton, Alta.

They also point toward a growing tension between those protesting in Coutts and the leadership group due to lack of representation at the blockade.

In February, Olienick, Lysak, Morin, Carbert and nine others were arrested after RCMP uncovered a cache of weapons in Coutts.

Olienick is also charged with making and possessing an explosive device while Lysak faces a charge of uttering threats.

Once remanded, phone records show the four men contacted the bosses either directly or, allegedly, through family members, according to police.

All four men have a trial set for June 2023 while the investigation into the suspected leadership team is still ongoing.

These portions of the police documents are being unsealed after a legal challenge by a group of news organizations including CTV News.

None of the details alleged in the released documents have been tested in court.

A powerful 7.8 magnitude earthquake rocked wide swaths of Turkiye and Syria early Monday, toppling hundreds of buildings and killing more than 1,300 people. Hundreds were still believed to be trapped under rubble, and the toll was expected to rise as rescue workers searched mounds of wreckage in cities and towns across the area.

Experts say the outlook for the loonie in 2023 largely depends on commodity prices, how the U.S. dollar fares, and whether central banks are successful in avoiding a major recession.

China accuses U.S. of indiscriminate use of force over balloon

China on Monday accused the United States of indiscriminate use of force in shooting down a suspected Chinese spy balloon, saying it 'seriously impacted and damaged both sides' efforts and progress in stabilizing Sino-U.S. relations.'

BoC's first summary of deliberations coming this week. Here's what to expect

The Bank of Canada is set to publish its first summary of deliberations Wednesday, giving Canadians a peak into the governing council's reasoning behind its decision to raise interest rates last month.

Charles Kimbrough, a Tony- and Emmy-nominated actor who played a straight-laced news anchor opposite Candice Bergen on 'Murphy Brown,' died Jan. 11 in Culver City, California. He was 86.

An investigation that lasted almost two years has resulted in moose hunting violation convictions for six people and a lodge in Red Lake in northwestern Ontario.

The first battle tank from Canada destined for Ukraine lands in Poland, advocates come together to help sailors who have been stuck for months in a Quebec port, and Beyonce becomes the most decorated artist in Grammys history. Here's what you need to know to start your day.